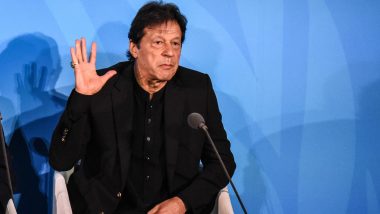 Islamabad, August 14: Prime Minister Imran Khan on Friday once again raised the Kashmir issue in his message to the people of the country as Pakistan commemorates its 74th Independence Day.

The development comes even as Pakistan has failed to get traction over the Kashmir issue at the international forums. On August 5 last year, India had revoked the special status of the former state of Jammu and Kashmir under Article 370 of the Indian Constitution and bifurcated it into two Union Territories (UTs). The move has left Pakistan rattled and has attempted to take the matter to the international community, but to no avail. Pakistan Independence Day 2020: August 14 is Black Day for Balochistan, Says Baloch People's Congress President Naela Quadri Baloch.

A majority of the Muslim countries, which earlier supported Pakistan, have now recognised and backed India's decision on Kashmir. Recently, Pakistan had to pay back Saudi Arabia USD 1 billion out of a USD 3 billion loan that it secured one and a half year ago to avoid default on international debt obligations after the kingdom decided to reduce its financial support.

This came after Pakistan was pushing for the foreign ministers' meeting of the Organisation of Islamic Cooperation (OIC) since India abrogated Article 370.nIn a report published by Dawn, a Pakistan diplomatic source confirmed that Saudi Arabia had shown reluctance to accept Islamabad's request for an immediate meeting of OIC foreign ministers' on Kashmir.nIndia has urged Pakistan to not interfere in its internal affairs repeatedly, saying it will not make its "untenable" claims acceptable.

Pakistan continues to persecute religious minorities residing in their own country.nInstead of focussing on reviving its floundering economy and taking steps to combat terrorism, Pakistan has been resorting to rhetoric against India over Kashmir in a bid to divert international attention.

Pakistan has also observed the so-called "Kashmir Solidarity Day", but it has failed to get traction both in the country and globally.nAfter desperate attempts to rake up the Kashmir issue globally, Imran Khan has admitted that his country has failed in its efforts to raise the matter.