New reports and videos regarding the alleged incident of women assault took place in Pakistan's Faisalabad claim that the women tore their clothes themselves after being caught while stealing from the shop. The police said that they are investigating the CCTV footage of the area. 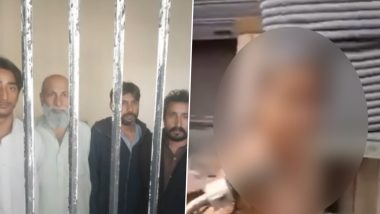 Faisalabad, December 8: Days after five men were arrested for allegedly assaulting, stripping and filming four women at Bawa Chak Market in Pakistan's Faisalabad, new videos emerged on internet claiming that the women tore their clothes themselves when they got caught stealing from the accused's shop. According to a report by UNI, SP Naeem Aziz said that the shopkeepers told the police that the women had stolen some stuff from the shop and upon getting caught they started tearing off their own clothes. Pakistan Woman TikToker's Clothes Torn, Thrown into Air by Hundreds on Independence Day 2021; FIR Lodged After Video Goes Viral.

The police is reviewing the CCTV footage of the incident. SP Aziz also added that some women were seen tearing their clothes in the footage. Their clothes got further torn when they were dragged out of the shop. Initial reports had stated that a woman filed a complaint alleging that she and three other women had gone to Usman Electric Store to request for a bottle to water as they were feeling thirsty when the incident took place. Four Women Assaulted, Stripped and Filmed Naked in Pakistan's Punjab, Police Arrests Four Suspects After Video Goes Viral.

The complaint alleged that Saddam, one of the accused and owner of the shop, started to shout and accused them of coming in the shop to steal. Saddam and other accused then allegedly started to assaulted the women, stripped them and made videos. According to reports, an FIR was filed against four named men- Saddam, Faisal, Zaheer, Anwar, and Faqeer Hussain - and ten unidentified suspects in the matter. Meanwhile, the police have arrested five accused in the case.

(The above story first appeared on LatestLY on Dec 08, 2021 07:40 PM IST. For more news and updates on politics, world, sports, entertainment and lifestyle, log on to our website latestly.com).