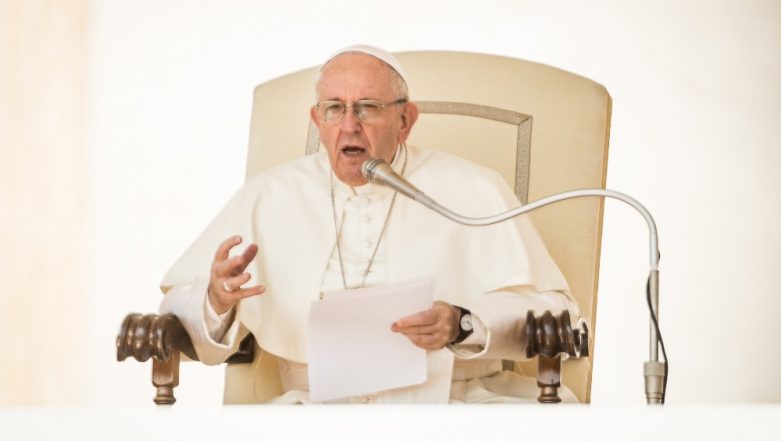 Rome, May 9: Pope Francis on Thursday issued new global rules for reporting sexual abuse in the Catholic Church, making it mandatory for the first time for all dioceses to set up systems for reporting abuse and cover-ups.

In an Apostolic letter, which is set to become Church law, he made clear that any sexual advance involving the use of power will now be considered abusive, CNN reported. Kiss Of Peace: Pope Francis, Grand Imam of Egypt Kiss In UAE, Call For World Peace; See Pic.

The new rules require all Catholic dioceses around the world to have a "public and accessible" system in place for reporting abuse by June 1, 2020.

"The crimes of sexual abuse offend Our Lord, cause physical, psychological and spiritual damage to the victims and harm the community of the faithful," the Pontiff wrote in the letter.

For the first time, clerics and other Church officials will be obliged to disclose any allegations they may have heard. Previously, this had been left to each individual's discretion, the report said.

Reports are expected to be made within 90 days to offices within Church dioceses. The decree also defined the covering-up of abuse as a specific category.

For decades the Catholic Church has been plagued by a series of sex abuse scandals in different countries around the world. The new rules come after a global meeting on sexual abuse at the Vatican in February and represent the Pope's pledge to offer "concrete measures" to combat sexual abuse.

There has not previously been a uniform, universal system in the Catholic Church for reporting and investigating allegations of abuse.

Although the norms represent an important clarification of procedures to be followed, they do not deal with the question of what happens to a priest or bishop who breaks these rules.

Thousands of people are thought to have been abused by priests over many decades and the Church has been accused of covering up crimes around the world. Survivors say new safeguarding protocols are needed to protect minors.