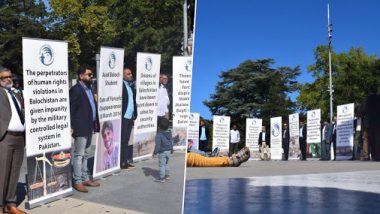 On Wednesday also, Baloch activists protested carried out similar protests in Geneva against Pakistan. Secretary-general of Baloch Human Rights Council, Samad Baloch called Pakistan a "breeding ground" for terrorism. He also termed Islamabad a "rogue state" with no law and justice. Baloch further added, “We have suffered a lot. Our socio-cultural, economic rights have been denied. Balochistan has been plundered, they have looted our resources.” Baloch Activist Hits out at Pak for 'running' After Kashmir, Highlights Its Atrocities Against Minorities.

President of Baloch Republican Party, Brahumdagh Bugti, in a video message posted on his Facebook account on Thursday also slammed the Pakistani Army and Inter-Services Intelligence against enforced disappearances, torture and killings of Baloch people. He said that Pakistan is socially, economically and financially is on the verge of destruction, and its leadership is running after Kashmir.

(The above story first appeared on LatestLY on Sep 13, 2019 06:24 PM IST. For more news and updates on politics, world, sports, entertainment and lifestyle, log on to our website latestly.com).