Russia's Foreign Minister Sergey Lavrov has endorsed India for a permanent seat on the Security Council calling it a key international actor. 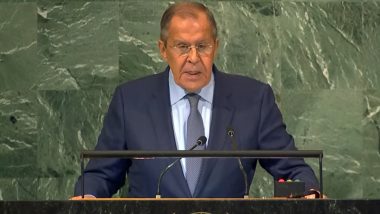 "The Council and UN have to be aligned to contemporary realities," he said on Saturday at the high-level meeting of the General Assembly.

"We see the prospect of making the Security Council more democratic exclusively, through broadening the representation of the countries from Africa, Asia and Latin America," he said. Indian-Origin UK Minister Suella Braverman Wins Queen Elizabeth II of the Year Award.

"We know to add India and Brazil, in particular, as key international actors and worthy candidates for permanent membership within the council," he added.

While Russia has indicated willingness to back India's candidacy, this is the first time that it has done so categorically in public.

Brazil does not have the backing of the US, while Germany and Japan, the other front-runners for permanent seats, don't have Russia's.

India figures in the Indo-Pacific strategy as a member of the Quad, the four-nation group that also includes Japan and Australia.

"Under the slogan of Indo-Pacific strategies, closed formats are being created and they undermine what has been built on the ASEAN for decades," he said.

NATO has now declared as "indivisible" the security of Euro-Atlantic and Indo-Pacific, he said (although the interpretation said India and Pacific).

The US was trying to make the whole world "its backyard", he asserted, and the West "is introducing dividing lines everywhere along the lines of a confrontation between blocs: You're either with us or against us," he said

"There is no third option possible, there are no compromises," he added.

Lavrov blamed the West and Ukraine for the invasion, starting with what he called the "Maidan coup" -- the protests at that venue in Kyiv that brought down the elected government of Viktor Yanukovych in 2013.

He said the rights of the Russian-speaking minority were restricted in Ukraine and, egged on by the West, President Volodymyr Zelensky began the confrontation to which his country responded with what he euphemistically called "special operations".

He said that Russia had compromised at the dissolution of the Soviet Union when the constituent republics were free to leave and allowed the reunification of Germany.

After it dissolved the Warsaw Pact, the Soviet bloc's equivalent of NATO, he asserted that there was no need for the Western military alliance, much less for it to encircle his country, he added.

He also referred to the interventions by the US in other countries and said, "Name, a country where Washington interfered by force and as a result of that life improved (there)".

Lavrov spoke shortly before India's External Affairs Minister S. Jaishankar, who appeared to distance New Delhi from Moscow over the invasion saying that India was on "the side that respects the UN Charter and its founding principles".

(The above story first appeared on LatestLY on Sep 25, 2022 11:05 AM IST. For more news and updates on politics, world, sports, entertainment and lifestyle, log on to our website latestly.com).