Russian President Vladimir Putin announced a “military operation” in Ukraine on Thursday and called on soldiers there to lay down their arms, defying Western outrage and global appeals not to launch a war. Russia’s commencement of the military strike in Ukraine has led to total chaos in the latter country 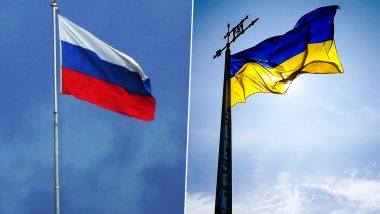 New Delhi, February 25: Russian President Vladimir Putin announced a “military operation” in Ukraine on Thursday and called on soldiers there to lay down their arms, defying Western outrage and global appeals not to launch a war. Putin made a surprise statement on television to declare his intentions. Russia’s commencement the military strike in Ukraine has led to total chaos in the latter country. Russian forces fired missiles at several cities in Ukraine and also landed troops on the country’s South Coast.

The Indian Embassy in Hungary informed that the government is working to establish evacuation routes for stranded nationals in Ukraine from Romania & Hungary.

Ukrainian President Volodymyr Zelenskiy said Russia resumed missile strikes at 4 am Friday, but its troops had been stopped from advancing in most directions.

Meanwhile, US President Joe Biden said Washington will intervene if Putin moves into NATO countries, stressing that if his Russian counterpart is not stopped now, he will be emboldened. The countries on NATO’s eastern flank, especially the Baltic states of Lithuania, Latvia and Estonia, all have received the first batches of US military troops and equipment.

Meanwhile, Ukraine has said that nearly 50 Russian occupiers have been killed, AFP reported.

Ukraine's President Volodymyr Zelensky has expressed dissatisfaction over the western coalition's efforts against Moscow. In a video address, Ukraine's President Volodymyr Zelensky said his country was "left alone" to fight Russia.  Russian President Vladimir Putin on Thursday announced a military operation in Ukraine, claiming it's intended to protect civilians. He added that Russia doesn't have a goal to occupy Ukraine.

Multiple explosions were heard in Kyiv in the early hours of Friday, according to news agency AFP.

US President Joe Biden vowed Thursday to defend “every inch" of NATO territory after Russia sent forces into Ukraine — but reaffirmed that no American troops would be deployed to Washington’s ally. “As I made crystal clear, the United States will defend every inch of NATO territory with a full force of American power," Biden said in an address to the nation from the White House. The president added, however: “Our forces will not be engaged in a conflict with Russia in Ukraine."

Earlier on Thursday, five Russian planes and one helicopter were shot down by Ukraine in Luhansk. Moments later, Russia confirmed taking out military infrastructure at Ukraine's air bases and "suppressed" its air defences.

Russia is facing global condemnation from Western powers over its actions in Ukraine with the European Union vowing to hold Moscow accountable for the military operation.  Russia-Ukraine Crisis: Russian Navy Captures Ukraine's Outpost on Snake Island in Black Sea

Earlier on Wednesday, the United States and its allies steped up sanctions pressure on Russia on Wednesday over the deployment of troops in separatist regions of eastern Ukraine, in one of the worst security crises in Europe in decades. US claims 100 percent of Russian troops are in invasion-ready formations and said an attack was imminent.  Russia-Ukraine Crisis: Ukraine's President Says 137 Dead After First Day Of Fighting

The Ukraine Parliament on Wednesday voted to approve in the first reading a draft law which gives permission to Ukrainians to carry firearms and act in self-defence, news agency Reuters reported. “The adoption of this law is fully in the interests of the state and society,” the authors of the law said in a note and added that the law was needed due to “existing threats and dangers for the citizens of Ukraine”.

Russia's defence ministry on Friday said that Russian forces had captured the strategic Hostomel aerodrome outside the Ukrainian capital Kyiv and landed paratroopers in the area.

The Indian Embassy in Poland issued a fresh advisory for Indians arriving at Ukraine-Poland Border. It has advised Indian nationals arriving at the Poland-Ukraine border by public conveyance to make for the Shehyni-Medyka border crossing, not the Krakowiec crossing.

Urgent advisory for Indians Ukraine desiring to be evacuated via Poland https://t.co/AXJzwYLhoI pic.twitter.com/9L5WXLHhyV

UK Minister James Heappey said that British and NATO troops must not play an active role in the Ukraine conflict after Russia's invasion. The risks of miscalculation in such a scenario could become existential, he added.

China President Xi Jinping spoke to his Russian counterpart Vladimir Putin on Friday. Jinping said that he supported solving the Ukraine crisis through talks in a call with Putin, state media said.

The first batch of evacuees from Ukraine reach Romania via the Suceava border crossing. Our team at Suceava will now facilitate travel to Bucharest for their onward journey to India, said MEA Spokesperson Arindam Bagchi

#WATCH The first batch of evacuees from Ukraine reach Romania via the Suceava border crossing. Our team at Suceava will now facilitate travel to Bucharest for their onward journey to India: MEA Spokesperson Arindam Bagchi

Russia foreign ministry spokeswoman on Friday said that there will be 'detrimental consequences' if Sweden and Finland try to join North Atlantic Treaty Organization (NATO).

(The above story first appeared on LatestLY on Feb 25, 2022 09:10 AM IST. For more news and updates on politics, world, sports, entertainment and lifestyle, log on to our website latestly.com).