Thanksgiving 2021: Rising Inflation in The US Likely to Put a Dent on Consumer's Wallet During Upcoming Festive Season

October's Consumer Price Index, which is a measure of a basket of goods, climbed a whopping 6.2 per cent from the same month last year, and now stands at a 30-year high, reports Xinhua news agency. 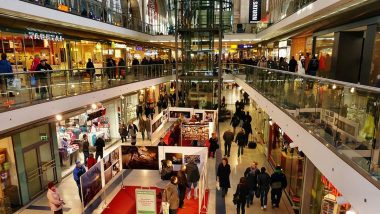 Washington, November 14:  The Thanksgiving holiday is just around the corner, but rapidly rising inflation in the US is expected to put a dent in people's wallets this festive season. October's Consumer Price Index, which is a measure of a basket of goods, climbed a whopping 6.2 per cent from the same month last year, and now stands at a 30-year high, reports Xinhua news agency. The cost of staple food items -- meat, eggs, fish and poultry -- has soared 10.5 per cent for the year ended September 2021, reported the Bureau of Labour Statistics.

The US has been bedeviled by supply chain issues throughout the pandemic, and that has raised costs and put them squarely on the shoulders of the consumer. Turkeys are the staple of the American Thanksgiving feast, which is coming up at month's end. The meaty birds are expected to cost significantly more this year, amid reduced supply during a supply chain crisis in which there's no end in sight. Thanksgiving Day 2021: US Farm Animal Sanctuary Asks Joe Biden to Give Pardoned Turkeys to It After Thanksgiving Ceremony.

Turkeys weighing between 8 pounds and 16 pounds are up 25 cents per pound more than last year, while the price of turkeys between 16 and 24 pounds cost around 21 cents per pound more, according to the Department of Agriculture. Last week, Jay Jandrain, the CEO of Butterball, one of the nation's leading turkey brands, told Fox Business News that turkeys will be more difficult to find this Thanksgiving, and it is reasonable to expect higher prices.

In sharp contrast to this year -- expected to be the most expensive Thanksgiving in decades -- the average price of last year's Thanksgiving had declined 4 per cent from the previous year, according to the Farm Bureau, as reported by CNBC News.

John Catsimatidis, the CEO of New York City supermarket Gristedes, who is also in the oil industry, told Fox Business News that the increasing price of oil and gas, coupled with labour shortages, is to blame for rising grocery prices. Prices are "increasing across the board and the main fault is the price of gasoline and the price of crude oil and labor shortages," Catsimatidis said. "This is a tax on the poor and the middle class," he added.

Gas prices now stand at a 7-year-high, and Republicans blame President Joe Biden for a crackdown on fossil fuel consumption since he took office. Most notable is the president's cancellation of a key permit that caused the shutdown of the Keystone Pipeline -- an oil pipeline stretching from Canada to the US.

(The above story first appeared on LatestLY on Nov 14, 2021 06:20 PM IST. For more news and updates on politics, world, sports, entertainment and lifestyle, log on to our website latestly.com).