Ukrainian President Volodymyr Zelensky has said that his country is willing to discuss the adoption of a neutral stance as part of a peace deal with Russia aimed at ending the war. 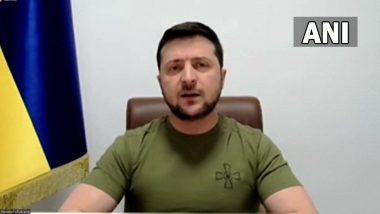 Kiev, March 28: Ukrainian President Volodymyr Zelensky has said that his country is willing to discuss the adoption of a neutral stance as part of a peace deal with Russia aimed at ending the war.

While speaking to a group of independent Russian journalists on Sunday for the very first time since the war began on February 24, the President said: "Security guarantees and the neutral, non-nuclear status of our state. We are ready to accept this. This is the most important point," CNN reported.

Zelensky told the journalists that, "this was the first point of principle for the Russian Federation, as I recall. And as far as I remember, they started the war because of this". Russia-Ukraine War Latest Updates: Ukraine Says Russia Wants to Split Nation, Calls for More Arms; West Needs More Courage in Helping Ukraine Fight, Says Zelenskyy.

Any agreement would have to be put to the Ukrainian people in a referendum, he said, while stressing his desire to reach a concrete peace agreement.

"So this clause is a security guarantee clause for Ukraine. And since they say it's for them (security guarantees) as well, it's understandable to me, and it's being discussed. It's in-depth, but I'm interested in making sure it's not just another piece of paper.

"So we're interested in having that paper turned into a serious treaty to be signed," the President said.

Zelenksy further reiterated that "the issues of Donbas and Crimea must be discussed and solved" during the negotiations.

The President's statement came after a member of Ukraine's delegation at the negotiations confirmed that the next round of talks will take place in Turkey from Monday to Wednesday.

Without mentioning the exact location of the talks, David Arakhamiya the decision was taken during a round of video talks between the two sides on Sunday, Ukrayinska Pravda reported.

Meanwhile, Vladimir Medinskiy, a member of the Russian delegation, said the meeting will take place Tuesday and Wednesday.

Ukrainian and Russian delegations have held three rounds of negotiations in-person in Belarus since February 28, and the fourth one started on March 14 in a format of video conference, Xinhua news agency reported.

The announcements were made a week after Turkish President Recep Tayyip Erdogan had renewed his offer to bring the leaders of Russia and Ukraine together in his country for final decisions for a peace agreement.

On March 25, Erdogan had said that Moscow and Kiev were close to an agreement on four issues -- Ukraine's accession to NATO; recognition of the Russian language as the second official language in Ukraine; demilitarisation; and collective security.

But the Russian demands on the future status of Crimea and the eastern Donbas region continue to be the most important disagreement in negotiations, he said.

(The above story first appeared on LatestLY on Mar 28, 2022 10:18 AM IST. For more news and updates on politics, world, sports, entertainment and lifestyle, log on to our website latestly.com).