The United States is planning to designate Yemen'sYemen's Houthi movement as a foreign terror organization, reported global news agency Reuters. The development was confirmed by the US Secretary of State Mike Pompeo on Sunday. 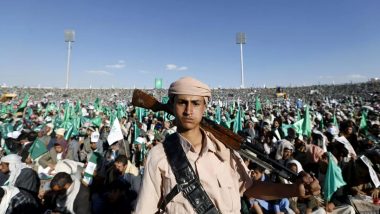 Washington, January 11: The United States is planning to designate Yemen'sYemen's Houthi movement as a foreign terror organization, reported global news agency Reuters. The development was confirmed by the US Secretary of State Mike Pompeo on Sunday. The decision to ban Houthi movement was taken days before the inauguration ceremony of US President-Elect Joe Biden.

"The Department of State will notify Congress of my intent to designate Ansar Allah sometimes referred to as the Houthis as a Foreign Terrorist Organization (FTO)," reported the global news agency quoting Pompeo as saying. Notably, the Houthi movement is Iran-aligned group. India Condemns Missile Attack on Oil Facility in Saudi Arabia.

Houthi Movement has been fighting a Saudi-led military coalition since 2015. Houthi Movement is an Islamic political and armed movement that emerged from Sa'dahSa'dah in northern Yemen in the 1990s. The movement is also known as Ansar Allah. It is called Houthis because its founder is from the Houthi tribe. In the 1990s, the Houthi tribe set up a religious revival movement for the Zaydi sect of Shi'iteShi'ite Islam.

Houthis fought a series of guerrilla wars with the national army with the national army of Yemen. The group has links with Iran. Houthis seized the capital Sanaa in 2014. They also killed the former ruler of Yemen Ali Abdullah Saleh in 2017. Despite air attacks on Houthis, they managed to launch drones and missiles on Saudi cities.

Notably, Yemen has been mired in civil war since late 2014 when the Iran-backed Houthis seized several northern provinces and forced the internationally-recognized government of President Abd-Rabbu Mansour Hadi out of Sanaa. The Saudi-led Arab coalition intervened in the Yemeni conflict in 2015 to support the government.

(The above story first appeared on LatestLY on Jan 11, 2021 03:26 PM IST. For more news and updates on politics, world, sports, entertainment and lifestyle, log on to our website latestly.com).