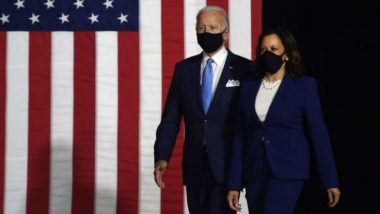 Washington, October 18: A fortnight before the day of voting, Democratic Party nominee Joe Biden has bolstered his chances of winning the 2020 presidency. The aggregate of major pre-poll surveys extended his lead over President Donald Trump by 11 points -- which most pollsters now consider as near-decisive to seal the November 3 contest. US Elections 2020 Poll Tracker: Advantage Biden in Swing States? Why Florida Matters The Most to Donald Trump?

As per the CBS poll tracker, which is based on the inputs received from 10 major pre-poll surveys, Biden is being backed by 54.2 percent of the "decided voters". On the contrary, Trump is being supported by 43.5 percent of the voters who have confirmed to the researchers whether their electoral choice is red or blue.

A margin of error - which could be wide enough as seen in 2016 - exists in the pre-poll surveys as it does not accumulate the views of undecided voters. Trump is backing on this section of the electorate, who are yet to open their cards.

A majority of the undecided voters are based in the swing states, which are crucial in determining the presidential poll results. Not only are the swing states known for their fluctuating electoral mood, but also the number of electoral college votes they carry.

At present, Biden is leading in six battleground states - Michigan, Wisconsin, Arizona, Georgia, Pennsylvania and Florida. Trump is ahead in Ohio and Iowa, but is hopeful of reclaiming the lead in Florida by end of the month. The state, with 29 electoral college voters, is crucial for the prospects of Trump and had propelled his victory in 2016 despite losing the popular vote count.

(The above story first appeared on LatestLY on Oct 18, 2020 10:14 PM IST. For more news and updates on politics, world, sports, entertainment and lifestyle, log on to our website latestly.com).