The comment raised eyebrows in both the US and around the world and resulted in 'New World Order' becoming one of Twitter's trending topics on Monday. 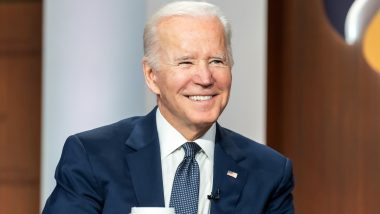 Moscow, March 22: US President Joe Biden has raised eyebrows after he claimed a "new world order" would soon be established and that it was up to the US to lead it.

During a speech on Monday at Business Roundtable's CEO Quarterly Meeting, Biden claimed the world was at "an inflection point" which "occurs every three or four generations" and that it was up to the US to determine the outcome, RT reported. Danish Siddiqui’s Parents Initiate Legal Action Against Taliban at International Criminal Court.

"As one of the top military people said to me in a security meeting the other day, 60 million people died between 1900 and 1946, and since then we've established a liberal world order and that had not happened in a long while," the president said.

The comment raised eyebrows in both the US and around the world and resulted in 'New World Order' becoming one of Twitter's trending topics on Monday.

The term 'new world order' has historically been used to refer to an era of great global change and has been used by politicians such as former US President George H.W. Bush, former US Secretary of State Henry Kissinger, and former UK Prime Minister Tony Blair, RT reported.

For decades, however, the phrase has also been the subject of a major conspiracy theory which alleges a secret, elitist plot to form an oppressive global government.

(The above story first appeared on LatestLY on Mar 22, 2022 05:49 PM IST. For more news and updates on politics, world, sports, entertainment and lifestyle, log on to our website latestly.com).