US Releases Flight Path Image of Drone Downed by Iran

Opposition leaders in the United States, meanwhile, have called for complete restraint to be shown, with all of them calling for no war with Iran. 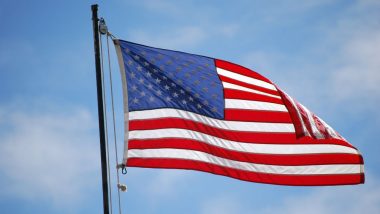 New Delhi, June 21: The United States released an image of the flight path undertaken by its military drone which was downed by Iran over the Gulf of Oman on Thursday. Iran Military Claims to Have Shot Down US Drone, Tension Likely to Escalate.

While Iran has claimed that the "intruding American spy drone" was shot as it was in their airspace, Washington has labelled it as "an unprovoked attack." They claim that the US drone was flying over international waters when it was attacked.

Released by the US Department of Defence, the image supports the United States' claim that the drone was not in Iranian territory when it was shot down, according to Sputnik. In the image, the RQ-4 Global Hawk's flight path shows it was over international waters.

Iran, on the other hand, has also released a video and images backing their claim. The two countries' respective proof is similar until the final moments before the unmanned aerial vehicle was shot down.

While the US President initially called the incident a "very big mistake" on Iran's part in a tweet, he later took a more restrained stand while talking about the issue with CNN on Thursday. Opposition leaders in the United States, meanwhile, have called for complete restraint to be shown, with all of them calling for no war with Iran.

"It's easy for politicians to pound the table and talk about how tough they are. But it will not be the kids of billionaires who get killed in a war with Iran. It will be working class kids. We must work to solve this crisis with Iran diplomatically, not go to war," Democratic Presidential hopeful Bernie Sanders tweeted. Iran Not to Extend 60-Day Nuclear Deal Deadline

"Trump provoked this crisis, and his reckless foreign policy by tweet will only worsen it. I've co-sponsored legislation to prohibit a war with Iran. We need to de-escalate tensions--not let the war hawks in this administration drag us into conflict. #NoWarWithIran," US Senator Elizabeth Warren tweeted.

Since its withdrawal from the Iran nuclear deal, Washington had reimposed and tightened sanctions on Tehran in a "maximum pressure" campaign with an aim to curb its nuclear and ballistic missiles programme.

(The above story first appeared on LatestLY on Jun 21, 2019 10:39 AM IST. For more news and updates on politics, world, sports, entertainment and lifestyle, log on to our website latestly.com).

Comments
Tags:
Airspace Drone military drone United States US US Department of Defence US Drone US president
Comments
You might also like