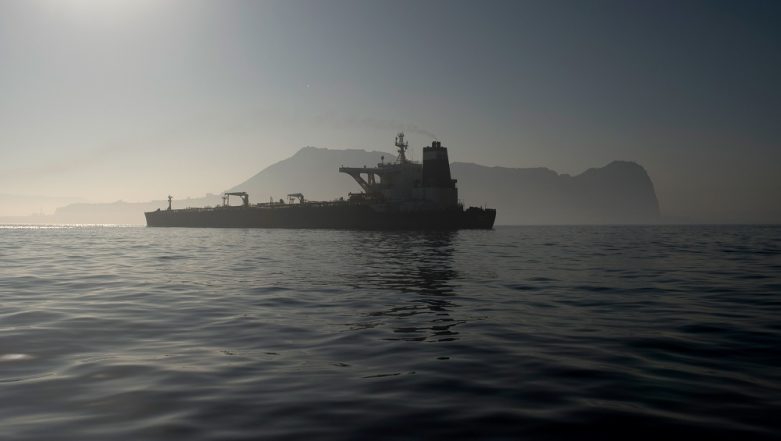 Washington, August 16: The United States on Thursday threatened a visa ban on the crew of a seized Iranian supertanker whose departure from Gibraltar Washington failed to block. State Department spokeswoman Morgan Ortagus said the Grace 1 was assisting Iran's Revolutionary Guards -- which the US deems a terrorist organization -- by transporting oil from Iran to Syria when it was detained last month. "Crewmembers of vessels assisting the IRGC (Revolutionary Guard Corps) by transporting oil from Iran may be ineligible for visas or admission to the United States under the terrorism-related inadmissibility grounds," Ortagus said.

"The maritime community should be aware that the US government intends to revoke visas held by members of such crews. "In the case of the M/T Grace I, we will continue to act consistent with our existing policies concerning those who provide material support to the IRGC." Britain Releases 24 Indian Crew Members of Seized Iranian Ship Grace 1.

Gibraltar's Supreme Court earlier Thursday ruled in favour of releasing the vessel seized on suspicion of shipping oil to war-torn Syria in breach of international sanctions. Hours before the announcement, the US had launched a last-minute legal move demanding that the British overseas territory detain the ship. Gibraltar police and British special forces seized the Grace 1, carrying 2.1 million barrels of Iranian oil, on July 4, provoking a diplomatic crisis.

Tehran retaliated by seizing a British tanker, the Stena Impero, two weeks later in the strategic Strait of Hormuz -- the conduit for much of the world's crude -- for breaking "international maritime rules".

The capture of the tankers heightened tensions just as European nations scramble to save a landmark nuclear deal with the Islamic Republic after the US pulled out of the accord in May last year and started imposing painful sanctions on Iran. Iran responded by suspending some of its commitments under the nuclear deal.

Gibraltar Chief Justice Anthony Dudley said the decision to release the tanker followed written assurances from Iran that the Grace 1 would not be headed for countries "subject to European Union sanctions".

Gibraltar chief minister Fabian Picardo hailed the ruling, saying in a statement: "We have deprived the Assad regime in Syria of more than $140 million worth of crude oil."