US to Pull Out Troops From Syria, Donald Trump Declares Victory Over ISIS 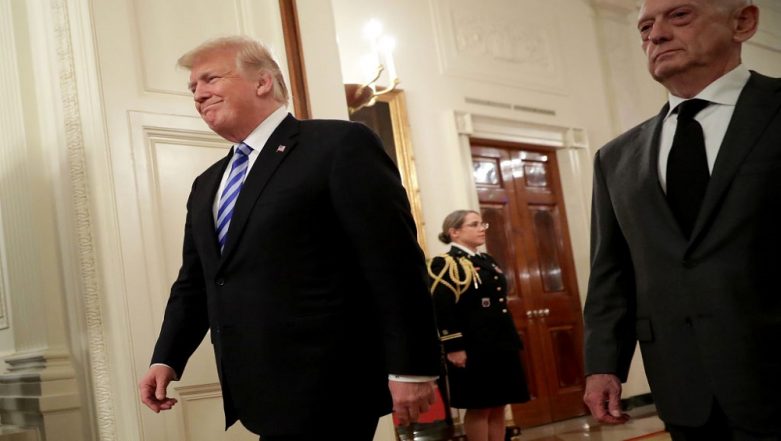 Washington, December 19: The White House on Wednesday issued a shock announcement on the exit of United States' troopers from war-torn Syria. President Donald Trump said the rationale behind the unprecedented decision is the wipeout of Islamic State (ISIS) from the region. With the US troops moving out, their Israeli counterparts would be the only foreign force left on the Syrian soil to take on the Bashar-al-Assad regime, which is being militarily aided by Russia.

The pull-out of US from Syria is bound to have extraordinary geopolitical ramifications and throws into question the fate of US-backed Kurdish fighters who have been tackling the ISIS jihadists. Kerala Shocker: 10 People, Including 5 Minors, Flee From Kannur to Join ISIS.

"We have defeated ISIS in Syria, my only reason for being there during the Trump Presidency," Trump tweeted. The US official said the decision was finalized Tuesday.

"Full withdrawal, all means all," the official told AFP when asked if the troops would be pulled from all of Syria. The official would not provide a timeline.

"We will ensure force protection is adequately maintained, but as quickly as possible," the official said. Currently, about 2,000 US forces are in Syria, most of them on a train-and-advise mission to support local forces fighting IS.

A large contingent of the main fighting force, an alliance known as the Syrian Democratic forces (SDF), is Kurdish and is viewed by Turkey as a "terrorist" group.

Ankara has said it plans to launch an operation against the Kurdish militia, known as the YPG (Kurdish People's Protection Units). The Pentagon would not confirm the US troop pull-out.

"At this time, we continue to work by, with and through our partners in the region," Pentagon spokesman Colonel Rob Manning said. While the YPG has spearheaded Washington's fight against IS, US support has strained relations between the NATO allies.

Ties have grown more fraught since the US set up observation posts in northern Syria close to the border with Turkey to prevent any altercation between Turkish forces and the YPG. IS swept across large swaths of Syria and neighboring Iraq in 2014, implementing their brutal interpretation of Islamic law in areas they controlled.

But they have since seen their dream of a state crumble, as they have lost most of that territory to various offensives. In Syria, IS fighters are holding out in what remains of the pocket that once included Hajin, including the villages of Al-Shaafa and Sousa.

Most US forces are stationed in northern Syria, though a small contingent is based at a garrison in Al-Tanaf, near the Jordanian and Iraqi border.