West Nile Virus in US: 7 States Detect Mosquitoes Carrying Virus That Can Cause Paralysis in Humans, California Reports 1st Death in 2021; Know About Symptoms & Treatment

At least six states of the US have detected mosquitoes that carry West Nile virus, while in four states, several people have been diagnosed with the virus. The West Nile virus can paralyse humans. According to reports, California reported the first death due to the virus in 2021 in San Luis Obispo County. 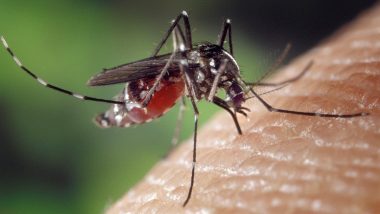 Washington, July 10: At the time when the United States is grappling to deal with the COVID-19 pandemic, at least six states of the country have detected mosquitoes that carry West Nile virus, while in four states, several people have been diagnosed with the virus. The West Nile virus can paralyse humans. According to reports, California reported the first death due to the virus in 2021 in San Luis Obispo County.

The states where mosquitoes carrying West Nile virus detected are - Arizona, Arkansas, Illinois, Iowa, Massachusetts, New York and Colorado. As per Centers For Disease Control and Prevention (CDC), the US states where the virus is found in humans are  - Arizona, Arkansas, Illinois and Iowa. What is West Nile Virus? Here’s What You Should Know About This Deadly Pathogen.

California Department of Public Health (CDPH) director Tomas J Aragon, on Friday, said that more cases of the fatal virus, which could be transmitted to humans and animals by the bite of an infected mosquito, had been reported recently, reports Xinhua news agency. He added that the West Nile virus is increasing in the state and also urged people to take precautions to protect themselves against a mosquito bite.

Till July 9, the virus had been detected in 45 dead birds from six counties and 177 mosquito samples from 13 counties. According to CDPH), hot temperatures are the main reason for increase increasing number of mosquitoes. Meanwhile, on July 2, two groups of mosquitoes tested positive for the West Nile virus in New York’s Rockland County.

Notably, the risk of serious illness to most people is low due to the West Nile virus. However, less than 1 percent of people can develop serious neurologic illnesses such as encephalitis or meningitis. Los Angeles County Reports First West Nile Virus Death in 2020.

According to CDC, eight out of ten people infected with West Nile Virus do not develop any symptoms. Meanwhile, one out of five-person develops a fever. Most of the people can recover completely. However, fatigue and weakness can last for weeks. One out of 150 people infected with the virus develops a serious illness that can even affect their nervous system. These people can have a high fever, headache, neck stiffness, stupor, disorientation and even paralysis.

Notably, no vaccine has been developed so far for the treatment of this virus. Doctors generally use pain relievers to reduce fever and other ailments. In most severe cases, people need to be hospitalised and are given intravenous fluids, pain medication, and nursing care.

(The above story first appeared on LatestLY on Jul 10, 2021 03:51 PM IST. For more news and updates on politics, world, sports, entertainment and lifestyle, log on to our website latestly.com).