20 Years Of Gadar: Sunny Deol Expresses Love and Gratitude to Fans, Says ‘We Made a Film, You Made It an Event’

The 2001 film, which also starred Ameesha Patel in the lead, became an instant hit. 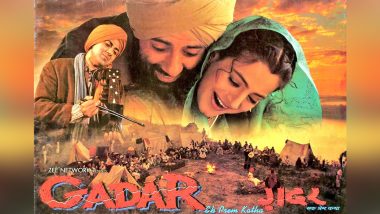 Bollywood actor Sunny Deol's 'Gadar: Ek Prem Katha' has clocked 20 years today and the star thanked the audience for making his film an event. The 2001 film, which also starred Ameesha Patel in the lead, became an instant hit. The Anil Sharma directorial did not just impress viewers but also registered huge numbers at the box office. As the film hits a milestone today, the actor-politician took to his Twitter handle to express gratitude to all his fans who made the film a 'historic' affair. Aamir Khan On Lagaan Vs Gadar Clash: Don’t Think Sunny Deol And Anil Sharma Knew It’s Going To Be So Huge.

Deol tweeted a video song from Gadar, 'Musafir Jaane Wale', featuring him and Ameesha. Sharing the video, he thanked viewers for showering the action love story with so much love. He wrote, "We made a film, you made it an event! #20yearsofGadar, I express my gratitude to everyone who made our film historic." The actor also tagged Ameesha, Anil Sharma, and others associated with the 2001 project as he celebrated the milestone of the epic film. Sunny Deol and Ameesha Patel’s Gadar: Ek Prem Katha To Have a Sequel, Filmmaker Anil Sharma Says He’s Working On It.

Apart from being a massive box office success, the film also won many accolades and swept awards in shows like -- IIFA Awards, Filmfare Awards, Sansui Viewer's Choice Awards, Screen Awards, and Zee Cine Awards. 'Gadar: Ek Prem Katha' was set during the Partition of India in 1947. Starring Deol in the lead role of Tara Singh, the period drama followed his life from being a truck driver in pre-independence India to him saving a Muslim girl (Patel) during the Partition, to their love story, and him travelling to Pakistan to bring her back when her family refuses to recognise her alliance with Tara.

Sunny Deol on 20 Years of Gadar

The film remains one of the most successful cross-border love stories of the Hindi cinema due to the story and powerful performances by Deol, Patel, Lillete Dubey, late Amrish Puri, late Vivek Shauq and others.