The movie, also featuring Chris Pine and Thandie Newton, is directed by Januz Metz. According to Variety, the project is based on Olen Steinhauer''s 2015 novel of the same name. 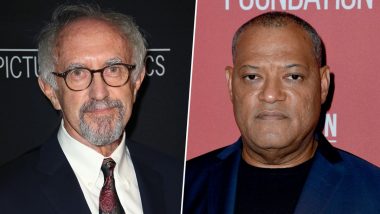 Actors Jonathan Pryce and Lawrence Fishburne have joined Amazon Studios' espionage thriller "All the Old Knives". The movie, also featuring Chris Pine and Thandie Newton, is directed by Januz Metz. According to Variety, the project is based on Olen Steinhauer''s 2015 novel of the same name and has been acquired by Amazon Studios. Steinhauer has adapted the screenplay from his book for the film. Swan Song: After Awkwafina, Glenn Close Joins Mahershala Ali and Naomie Harris in Apple Drama

Set in the idyllic town of Carmel-by-the-Sea, the story follows ex-lovers -- one a CIA spy, one an ex-spy -- who meet over dinner to reminisce on their time together at Vienna station. "The conversation moves inevitably to the disastrous hijacking of Royal Jordanian Flight 127, which ended in the deaths of all on board. Fantastic Beasts 3: Mads Mikkelsen Reacts to Reports of Replacing Johnny Depp in Warner Bros Movie, Says ‘That Is on Rumour Basis’

That failure haunts the CIA to this day, and Henry has come to Carmel to close the book on that seedy chapter. Over a sumptuous dinner, it becomes clear that one of them is not going to survive the meal," the official logline read. The film will be produced by Amazon Studios, Chockstone Pictures and Nick Wechsler Productions in association with Entertainment One (eOne). Pine will serve as executive producer alongside Joanne Lee, Kate Churchill, Richard Hewitt and Mark Gordon.