Bhool Bhulaiyaa 2 had released on May 20, and has been a hit with the audience. The movie is directed by Anees Bazmee, and also stars Kiara Advani and Tabu. 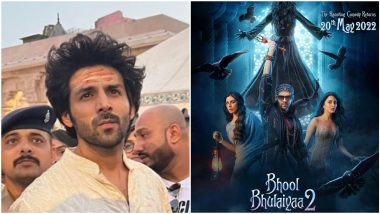 Riding high on the box office success of his latest film, Bhool Bhulaiyaa 2, actor Kartik Aaryan visited the holy city Varanasi. As per a source, it was part of Kartik's vow to visit sacred spots if his film tastes success. Bhool Bhulaiyaa 2 exceeded expectations with an impressive opening and standing out as one of the biggest opening weekend of the year with a total weekend collection of Rs 55.96 crore.  Bhool Bhulaiyaa 2 Box Office Collection Day 5: Kartik Aaryan’s Film Stands at a Total of Rs 76.27 Crore in India.

The young superstar had the crowds raving in the holy city as he visited the Kashi Vishwanath temple on Tuesday and performed the Ganga aarti in the evening.

Earlier, Kartik Aaryan had visited the Bangla Sahib Gurudwara in Delhi and later offered prayers at the Siddhivinayak temple in Mumbai.

Meanwhile, the Day 1 collection alone was Rs 14.11 crore, which was the biggest from any Hindi film this year, beating other projects like Gangubai Kathiawadi, Jayeshbhai Jordaar, among others. Bhool Bhulaiyaa 2 Movie Review: A Kartik Aaryan Show Trapped in a Spooky Comedy That's Neither Amuses Nor Scares!

Kartik is currently being hailed as a superstar by many critics and the audience for delivering the blockbuster of the year and is all set to impress fans with more interesting projects in his lineup including Shehzada, Captain India, Freddy and Sajid Nadiadwala's untitled next.

(The above story first appeared on LatestLY on May 25, 2022 12:40 PM IST. For more news and updates on politics, world, sports, entertainment and lifestyle, log on to our website latestly.com).