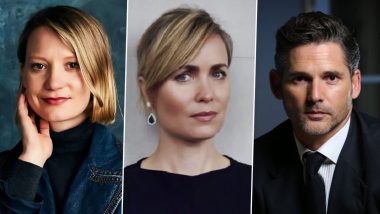 Mia Wasikowska, Radha Mitchell and Eric Bana are teaming up for the Australian family drama Blueback, based on Booker Prize nominee Tim Winton's novella. Wasikowska is best known for starring in the title role of Tim Burton's "Alice in Wonderland", Mitchell has films like "Phone Booth" and "Finding Neverland" to her credit, and Bana's filmography boasts of "Troy" and "The Other Boleyn Girl". Gloria: Actress Stephanie Vogt to Star in Netflix’s Spy Drama Series

Newcomers Ariel Donoghue and Ilsa Fogg, who play the protagonist Abby at different ages, are also part of the "Blueback" cast, reported Deadline.

The film follows Abby, a child who befriends a magnificent wild blue groper fish while diving. When Abby realises that the fish is under threat, she takes inspiration from her activist mother, Dora, and takes on poachers to save her friend. Borderlands Film Adaptation: Jack Black to Star in Cate Blanchett, Kevin Hart Starrer Based on the Popular Video Game

There starts her life-long journey to save the world's coral reefs. Robert Connolly is attached to direct and write the film, which marks his reunion with Bana after "The Dry". Also part of the cast are Liz Alexander, Kenyan-Australian newcomer Albert Mwangi and Clarence Ryan. Filming will be shot in two of the most remote parts of Australia: Bremer Bay and Ningaloo Reef.