Coming out in the support of Ukraine, veteran star Arnold Schwarzenegger recently made a strong appeal to Russian President Vladimir Putin via a video message. 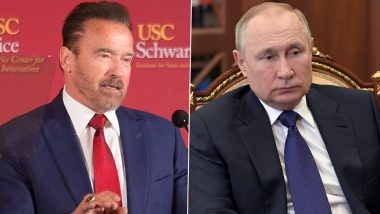 Coming out in the support of Ukraine, veteran star Arnold Schwarzenegger recently made a strong appeal to Russian President Vladimir Putin via a video message. Urging Putin to end the war in Ukraine, Arnold said, "I'm sending this message to various different channels to reach my dear Russian friends and the Russian soldiers serving in Ukraine," Schwarzenegger said in a nine-minute address. Steven Spielberg and Wife Kate Capshaw Donate USD 1 Million to Ukraine Relief Amid the Ongoing War.

He added, "I'm speaking to you today because there are things that are going on in the world that have been kept from you, terrible things that you should know about. Let me tell you the truth about the war in Ukraine." As per The Hollywood Reporter, the 'Terminator' star spoke about how the fighting was instigated by Russia in February, explaining that the invasion has been "declared illegal by 141 countries, that many civilian buildings (such as a maternity hospital) have been bombed, that there's now a massive refugee crisis and that thousands of Russian soldiers have died." Mila Kunis, Ashton Kutcher Reach USD 30 Million Donation Target for Ukraine.

"The world has turned against Russia because of its actions in Ukraine. The destruction that Russian bombs are raining down on innocent civilians has so outraged the world that the strongest global economic sanctions ever taken have been imposed on your country ... This is not the war to defend Russia like your grandfather or your great grandfather fought. This is an illegal war," he emphasised. Arnold also opened up about his father's dark history as a Nazi sergeant when tackling the Russian government's false claims that its troops are engaged in a "denazification" of Ukraine.

"(My father) was injured at Leningrad and the Nazi army he was part of did vicious harm to the great city and to its brave people," he said. "When my father arrived in Leningrad, he was all pumped up on the lies of his government. When he left Leningrad, he was broken -- physically and mentally. He lived the rest of his life in pain -- pain from a broken back, pain from the shrapnel that always reminded him of those terrible years and pain from the guilt that he felt. To the Russian soldiers listening to this broadcast: You already know much of the truth that I'm speaking. You've seen it in your own eyes. I don't want you to be broken like my father," Arnold shared.

Schwarzenegger concluded the video with a message to Russian protesters who have risked imprisonment to take to the streets to voice opposition to the war in Ukraine. "The world has seen your bravery," he said. "We know that you've suffered the consequences of your courage. You have been arrested, you've been jailed and you've been beaten. You are my new heroes. You have the strength of Yuri Petrovich Vlasov. You have the true heart of Russia," Arnold said. Arnold's video has garnered over 6.7 million views on Twitter. (ANI)