The festival of Janmashtami is celebrated every year by Hindus to mark the birth of Lord Krishna, the God who is the embodiment of playfulness and innocence. 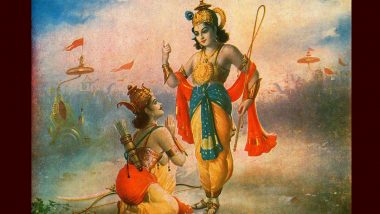 New Delhi, August 19: The festival of Janmashtami is celebrated every year by Hindus to mark the birth of Lord Krishna, the God who is the embodiment of playfulness and innocence. As per the Hindu calendar, Lord Krishna, an avatar of Lord Vishnu, was born on the eighth day of the month of Bhadra. The day mostly falls in the months of August or September as per the Western calendar. And when we talk about Lord Krishna, there is no way we miss out on one of the most sacred Hindu scripture, 'The Bhagavad Gita'.

As Indians, we are all familiar with the Bhagavad Gita as it has widespread recognition for its values and beliefs in India and abroad as well. The Bhagavad Gita is also known as 'The Song of God', but most people enunciate it as 'Gita.' Krishna Janmashtami 2022 Celebration: Devotees Gather in Large Numbers in Mathura To Celebrate Lord Krishna's Birthday (Watch Video).

According to the 'Mahabharata', Lord Krishna gave the message of the Gita to Arjuna during the battle of Kurukshetra. It is an Upanishad given under Bhisma Parva of Mahabharata. Shrimad Bhagavad Gita, one of the best holy books of Hindus, was written thousands of years ago. On the auspicious occasion of Janmashtami, we have curated a list of 'Top 15' beautiful Gita Updesh for everyone to understand the value of life and feel motivated every day. Krishna Janmashtami 2022 Date & Puja Timings: Significance, Shubh Muhurat and Puja Vidhi Related to Hindu Festival Celebrating the Birth of Lord Krishna.

1. "Those who are motivated only by the desire for the fruits of action are miserable, for they are constantly anxious about the results of what they do." - Bhagavad Gita

2. "Through selfless service, you will always be fruitful and find the fulfilment of your desires." - Bhagavad Gita

3. "As you put on fresh new clothes and take off those you've worn, You'll replace your body with a fresh one, newly born." - Bhagavad Gita

4. "To those who have conquered themselves the will is a friend. But it is the enemy of those who have not found the Self within them." - Bhagavad Gita

6. "Whatever action is performed by a great man, common men follow in his footsteps, and whatever standards he sets by exemplary acts, all the world pursues" - Bhagavad Gita

7. "Calmness, gentleness, silence, self-restraint, and purity: these are the disciplines of the mind." - Bhagavad Gita

8. "Better than mechanical practice is knowledge. Better than knowledge is meditation. - Bhagavad Gita

9. "As a person puts on new garments, giving up old ones, similarly, the soul accepts new material bodies, giving up the old and useless ones." - Bhagavad Gita

10. "Seek refuge in the attitude of detachment and you will amass the wealth of spiritual awareness. The one who is motivated only by the desire for the fruits of their action, and anxious about the results, is miserable indeed." - Bhagavad Gita

11. "A person can rise through the efforts of his own mind; or draw himself down, in the same manner. Because each person is his own friend or enemy." - Bhagavad Gita

12. "When meditation is mastered, the mind is unwavering like the flame of a lamp in a windless place." - Bhagavad Gita

14. "Be calm, Do love and practiced selflessness" - Bhagavad Gita

Bhagavad Gita beautifully discusses monotheism, karma yoga, Gyan yoga, and bhakti yoga. Additionally, the Bhagavad Gita is regarded as an epic scripture in which one can find solutions to all of their problems.