For the announcement of Korea's top actors Hyunbin (40) and Son Ye-jin (40)'s marriage on the 11th, global fans in Japan and China have also sent blessings online. 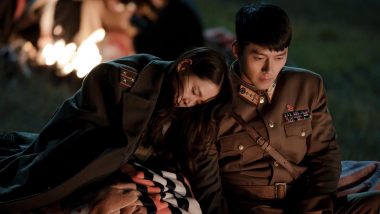 Son Ye-jin and Hyun Bin of Crash Landing on You (Photo Credits: Twitter)

For the announcement of Korea's top actors Hyunbin (40) and Son Ye-jin (40)'s marriage on the 11th, global fans in Japan and China have also sent blessings online. The tvN's drama Crash Landing on You (2019-2020), starring the two actors together, gained huge popularity in various countries as well as Korea. BREAKING: #HyunBin And #SonYeJin Announce Marriage.

In Japan, where the 'Crash Landing on You' particularly gained amazing popularity, many media and newspapers such as Yomiuri Shimbun and Sankei Sports reported the marriage of Hyunbin and Son Ye-jin. More than 1,400 comments were posted on a news article. Crash Landing on You, a TV series depicts the relationship between a South Korean conglomerate heir and an elite North Korean military officer, was released on Netflix in February 2020, had ranked in the Top 10 charts for 10 weeks in Japan. #SonYeJin’s Celebrity Friends Congratulate Her On Getting Engaged To #HyunBin … – Latest Tweet by Soompi.

Netflix Japan's official Twitter said on a tweet, "Congratulations on Hyunbin and Son Ye-jin's marriage." Japanese fans also wrote comments, saying "May the two be happy even when they get old and become grandfather and grandmother," and "I feel like my relative is getting married." With the announcement of their marriage, 'Hyunbin' keyword ranked first in trending searches on Japan's portal site Yahoo on the previous day.

Hyun Bin wl always put Son Yejin above and beyond anything. Always her.❤️

Full consideration for the bride-to-be.

In particular, Hyun Bin waited until the end of all filming of Son Ye-jin's new lead drama "30, 9."Ahead of its first broadcast on the 16th.https://t.co/k59gAYHc5c pic.twitter.com/qmUQ59LW5b

who needs a valentine date when you’re living in a world where hyun bin and son ye-jin can freely go on dates all day everyday because they’re a couple. A FUTURE MARRIED COUPLE. A ONE DAY IN MARCH KINDA WEDDING COUPLE.

Chinese fans are also blessing their marriage. Weibo announced their marriage on the main screen. Many Chinese fans commented on their marriage news, such as "I will watch 'Crash Landing on You' again," and "This love is so perfect, so my waiting is worth it." Hyunbin' and 'Son Ye-jin also ranked in Trending Now chart on Yahoo Taiwan. Asian countries such as Vietnam and Thailand, where Crash Landing on You was popular, also showed great interest in the two actors' marriage. In addition, Netflix Brazil and Netflix India also congratulated Hyunbin and Son Ye-jin's marriage on their official Twitter. (ANI/Global Economic)