Pop star Justin Bieber and the country music duo Dan + Shay among others have been sued by International Manufacturing Concepts, Melomega music and Sound Gems over a copyright infringement for their 2019 hit song 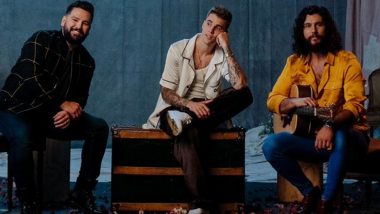 Pop star Justin Bieber and the country music duo Dan + Shay among others have been sued by International Manufacturing Concepts, Melomega music and Sound Gems over a copyright infringement for their 2019 hit song '10,000 Hours'. The single, which dropped in 2019, debuted at No 4 on the Billboard Hot 100. According to documents obtained by People magazine, the suit alleges that Bieber, 28, and the duo (Dan Smyers, 34, and Shay Mooney, 30) "stole the core portion" which includes the chorus, verse and hook from the 1973 song 'The First Time Baby Is A Holiday,' originally written by Palmer Rakes and Frank Fioravanti. Evan Rachel Wood Speaks Out About Marilyn Manson’s Defamation Lawsuit, Ahead of Her Two-Part Documentary Rising Phoenix.

As per the documents obtained by the outlet, the suit also points out that the song was not released until 2014, about five years before '10,000 Hours' dropped, and alleges there are "unmistakable similarities." The companies, who allege that they own the song, are seeking credit on the track, along with money in damages, statutory damages, attorney fees and "an injunction preventing further distribution of the song." Ed Sheeran Faces Legal Trouble as a Copyright Lawsuit Filed Over His 2017 Hit Single ‘Shape of You’.

The song was released in October 2019, just four days after Bieber tied the knot with Hailey Baldwin for the second time during a religious ceremony in South Carolina, which was attended by the couple's close friends, including both Smyers and Mooney, as well as Scooter Braun, who manages all three artists. In 2021, the stars even bagged a Grammy Award for best country duo/group performance for the song. Meanwhile, in 2020, the song earned the singer two AMAs, an iHeartRadio Music Award and a Billboard award.