Get latest articles and stories on Entertainment at LatestLY. American media personality Kourtney Kardashian and 'Blink-182' drummer Travis Barker got married to each other for the third in a lavish wedding ceremony at a castle in Portofino, Italy. 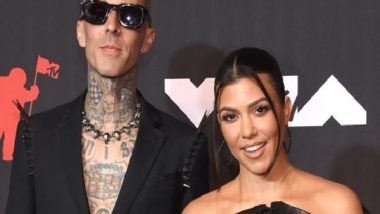 Rome [Italy], May 23 (ANI): American media personality Kourtney Kardashian and 'Blink-182' drummer Travis Barker got married to each other for the third in a lavish wedding ceremony at a castle in Portofino, Italy.

According to Page Six, the duo said 'I do' during a fairytale wedding celebration at Castello Brown on Sunday, one week after they got legally married in Santa Barbara, California.

For the intimate occasion, the bride sported a stunning Dolce & Gabbana mini dress with a massive cathedral veil. She completed the look with a glam makeup and a fresh baby pink manicure.

Meanwhile, Barker looked handsome in his custom black suit, which he had teased via his Instagram Stories ahead of the ceremony.

People magazine reported that the pair exchanged vows surrounded by red roses and loved ones, including their six total children: Kourtney's sons Mason and Reign and daughter Penelope, along with Travis' son Landon, daughter Alabama and stepdaughter Atiana.

Back in April, the newlyweds had gotten married in a "fake" Las Vegas wedding. Page Six had confirmed the ceremony was just for fun, as they hadn't obtained a marriage license. "Practice makes perfect," Kourtney had shared an Instagram post the following day with photos. (ANI)