Nick Jonas celebrates the one year anniversary of his album Spaceman. Jonas took to Twitter to share behind the scenes look at the song and to talk about how elevated he was. 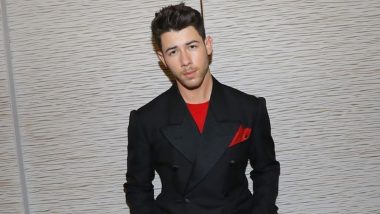 Washington, March 13: Singer Nick Jonas is elated as his fourth studio album clocked one year. Spaceman marks the first solo project from any of the Jonas Brothers since the trio got back together in 2019. Apart from Nick, the Jonas Brothers trio includes Kevin Jonas and Joe Jonas. Priyanka Chopra And Nick Jonas Step Out For A Dinner Date In Malibu (View Pics).

The album was released on March 12, 2021, through Island Records. Taking to his Twitter handle, Nick shared some behind-the-scenes pictures from shooting the album. "Hard to believe it's already been a year since the Spaceman release. Means so much to see you all revisiting the album today. It's a body of work I'm so proud of. #Spaceman," he wrote. Nick added, "From recording in the studio with @GregKurstin and @mozellamusic to pulling double duty hosting and performing on @nbcsnl this album holds such special memories. #Spaceman."

Hard to believe it’s already been a year since the Spaceman release. Means so much to see you all revisiting the album today. It’s a body of work I’m so proud of. #Spaceman pic.twitter.com/uffenvedeN

The album marks the first solo release of the 29-year-old singer since Last Year Was Complicated (2016) and the first solo project to be released since the reunion of the Jonas Brothers (with his older brothers Joe and Kevin) in 2019. The deluxe edition of the album was released on March 15, 2021, three days after the release of the standard edition. It features a sole guest appearance from the Jonas Brothers, who appear on the track Selfish, with Joe providing vocals and Kevin playing guitar on the song.

Spaceman consists of 11 songs including This Is Heaven, Sexual, and Death Do Us Part. During an earlier conversation with Apple Music's Zane Lowe, Nick spoke about the album's concept.

"I think the key for me was trying to find a way to give this idea a persona, give it a name. So Spaceman came into my mind because I was thinking, 'What's the one thing that all of us have felt during this time?' It's just completely disconnected from the world," the Jonas Brothers band member said.

He added, "We've gotten so accustomed to looking at a screen instead of human interaction, and I think the thing that keeps us all encouraged and hopeful is just the idea of knowing that there will be a tomorrow when this isn't our reality, and I think the body of work as a whole tracks that."

The singer further said, "But it felt like the right thing to start with Spaceman because it is such a stark visual and creative idea to then start the conversation of songs like This Is Heaven, which I'm really excited about. It touches on some of the things I did with Jealous and tracks like that, but in a new way, and just trying to continue to get better and evolve every day, push myself." Priyanka Chopra-Nick Jonas Welcome Baby Via Surrogacy; Katrina Kaif, Farhan Akhtar and Other Bollywood Celebs Wish the Couple.

Nick, who writes several of his own songs, also told Lowe that most of his music is dedicated to his wife Priyanka Chopra Jonas. Speaking about it, the singer said, "She loves it. Most of the songs are pretty much just love letters, which when I can't articulate the way I feel with my words with no music, I go to the studio. And I'm grateful to have that because it makes her happy, and that's most important."