Human: Ram Kapoor Opens Up About Working With Shefali Shah in the Disney+ Hotstar Show

Ahead of the release of Human, actor Ram Kapoor shared his experience working with Shefali Shah in the show. "It's always amazing to work with Shefali, 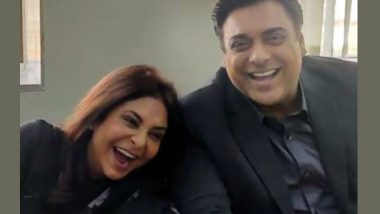 Ahead of the release of Human, actor Ram Kapoor shared his experience working with Shefali Shah in the show. "It's always amazing to work with Shefali, I've worked with her 2-3 times before and we get along really well. She's an absolute darling of a person, a total goofball, you know, she's a lot of fun when the camera's not rolling in! And I also tend to have a lot of fun when I work," he said. Don't Look Up: Leonardo DiCaprio, Jennifer Lawrence Starrer Is the Most-Watched Netflix Film in a Single Week.

Ram added, "So, we have a lot of fun, pulling each other's leg or playing pranks on somebody else. And that's the best way to work because you keep it light-hearted, you know, so you do serious work, but in between you try and have a little fun, I believe. That's the best way to work." RIP Shri Moti Dadlani: Vishal Dadlani's Father Passes Away, Says 'Lost My Best Friend, the Nicest and Kindest Man on Earth'.

Directed by Vipul Amrutlal Shah and Mozez Singh, 'Human' unravels unexpected secrets of the world of medicines and their effect on people with a gripping tale of murder, mystery, lust, and manipulation. The show will be out on Disney+ Hotstar on January 14.