American actor Rupert Grint, who is best known for his role as Ron Weasley in Harry Potter, admitted that he has not watched even half of the eight parts of the movie series. 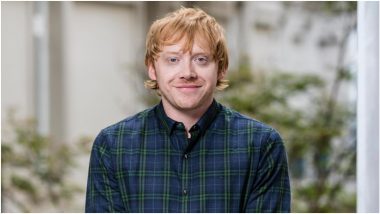 American actor Rupert Grint, who is best known for his role as Ron Weasley in Harry Potter, admitted that he has not watched even half of the eight parts of the movie series. In an interview with Variety, Grint who has co-starred as Ron Weasley in all eight 'Harry Potter' movies hasn't watched most of them.

Disclosing the same, he said, "I've probably seen the first three at the premieres, but after that, I stopped watching them. Harry Potter Star Rupert Grint Opens Up About Being a Father, Says ‘It’s a Very Different Love’

But now that I have a daughter (Grint's wife, actor Georgia Groome, gave birth to a baby in May), I will probably have to watch them with her." Speaking about the hit franchise, the 32-year-old star also revealed that he doesn't expect to be a part of the 'Harry Potter' series being developed by HBO Max. "It'll be weird if it was a continuation kind of thing. I weirdly feel quite protective of that character. Harry Potter Actress Jessie Cave Reveals Her Two-Month-Old Baby Tested Positive for COVID-19

Even when I saw the stage shows, it was a very strange experience. ... If it's like a different group of friends, I guess it would be interesting," he told Variety.

Meanwhile, on the work front, Grint at present, co-stars in the second season of M. Night Shyamalan's Apple TV Plus series 'Servant' where he is seen portraying the role of a brother to Lauren Ambrose.

Ambrose who is so traumatized by her child's death believes that the therapy doll she's been given is real. On the other hand, while referring to his daughter as the same therapy doll, Grint joked and said, "It's actually a vampire version. It's a vampire baby with fangs."