On the work front, Shehnaaz was last seen in the Punjabi film, Honsla Rakh opposite Diljit Dosanjh. She is reported to make her Bollywood debut with Salman Khan's Kabhi Eid Kabhi Diwali. 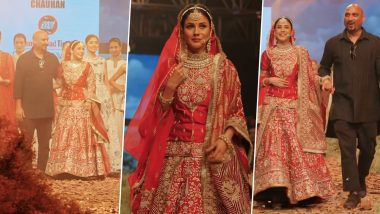 Walking on the ramp for the first time dressed in a bridal attire Shehnaaz Gill made a stunning appearance and looked extremely pretty. Looking exquisite in a Red Samant Chauhan Lehenga, Shehnaaz won everyone's heart. She started off walking confidently as the showstopper of the fashion show and then danced her heart out on Sidhu Moose Wala's song "Sohne Lagde". Shehnaaz Gill Turns Into Bride for Her Debut Ramp Walk, Grooves to Sidhu Moose Wala’s Song (Watch Viral Video).

Shehnaaz took to Instagram to share the video, she wrote, "Debut walk done right! Walked for the super talented designer @samantchauhan. Thank you people of Ahmedabad for making us extra special for me! Your hospitality and love are immeasurable. #ShowStopper #ShehnaazGill".

Fans were in awe of her as they left comments praising her for her Ramp debut. A fan wrote, "Most gorgeous punjabi bride #shehnaazgill". Another one wrote, "Most Beautiful Showstopper Ever, Keep Shining like the brightest star #shehnaazgill". And, another Instagram user echoed similar sentiments and wrote, "I'm so proud of you Gill, you nailed your first ramp".

On the work front, Shehnaaz was last seen in the Punjabi film, Honsla Rakh opposite Diljit Dosanjh. She is reported to make her Bollywood debut very soon. Due to Shehnaaz's close proximity to actor Salman Khan, fans have been speculating that she will be seen in his next film Kabhi Eid Kabhi Diwali.