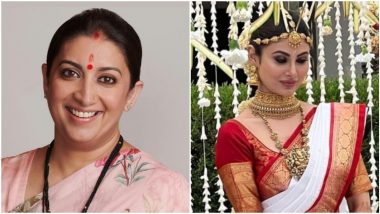 Taking to her Instagram handle, Smriti, shared a series of pictures from Mouni's wedding and wrote, "This girl came into my life 17 years ago... they claimed she was a novice then but such was her wisdom that she brought warmth and much joy along with the life lessons she infused amongst those who are lucky to have her as a friend, as family. Today she begins a new journey. May all the Gods be kind and bless her with happiness, prosperity, and good health.. for the boy.. well you are one hell of a lucky man .. God bless @nambiar13 .. love you @imouniroy."

Mouni also replied to Smriti by commenting on her post that read, "Such beautiful words.. I'm so grateful for you and your love. Love you so much.. missing you here." Mouni Roy and Suraj Nambiar Tie the Knot as Per Bengali Traditions After the South Indian Rituals.

Mouni tied the knot with Dubai-based businessman Suraj Nambiar in Goa on Thursday. The duo got married in two ceremonies--as per South Indian tradition in the morning and as per Hindu rituals on the night of January 27. Sharing pictures from her dreamy South Indian wedding on Instagram, Mouni wrote, "I found him at last. Hand in hand, blessed by family and friends. We are married. Need your love and blessings. 27.01.22 Love, Suraj and Mouni."