The post garnered more than a lakh likes within few hours of being shared. 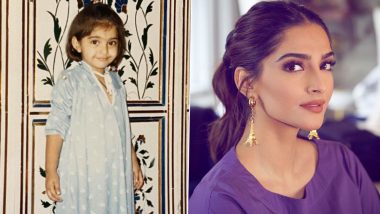 Seems like actor Sonam Kapoor Ahuja sure knows how to mark 'Throwback Thursday'! The actor took to her Instagram handle and treated fans with an adorable childhood picture of herself.  Sanak Ek Junoon: Rohit Roy Bose Talks About Playing an Ambitious Lawyer in Upcoming MX Player Show.

In the picture, Sonam could be seen donning a pastel blue dress with her hair styled in a fountain pony, as she posed cutely for the camera. Sharing the picture, the 'Khubsoorat' actor wrote, "Baby me was cute." Avika Gor: Being a Producer Has Made Me a More Humble Actor.

Sonam's mother- Sunita Kapoor also wrote, "Grow up sonam is cute and beautiful" in the comments section. Meanwhile, on the work front, Sonam will be seen in 'Blind'. She was last seen in the 2019 release 'The Zoya Factor'. She also had a cameo role in Anil Kapoor and Anurag Kashyap's 'AK vs AK', which had released on Netflix last year.