Sonam Kapoor who is soon going to be mother, recently hosted a baby shower in London. She had been vacationing there with her husband Anand Ahuja and sister Rhea Kapoor. The baby shower was colourful and extravagant and even had a personalised food menu. 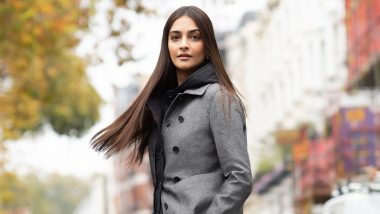 Mom-to-be Sonam Kapoor has been giving fashionable looks one after the other. The fashionista, who is currently residing in London with her husband Anand Ahuja, recently hosted a glitzy baby shower. The baby shower was all about fun, laughter, beautiful decor, fine flowers and lots of colours! She hosted a few friends for lunch and the decoration looked like a page from a Disney book. Cannes 2022: Sonam Kapoor Is the Ultimate Queen of Extravagant Looks on the Cannes Red Carpet!

Sonam's sister Rhea who is currently in London by her side shared some glimpses of the event on her Instagram. The food menu was personalised and hand-written.

For the event, Sonam wore a pink maxi dress with cape-like sleeves and paired it with gold earrings. She kept her hair loose while posing for a picture. A performer named Leo Kalyan, who performed at the baby shower, posted a picture with Sonam. Leo wrote, "A spice girl in Bollywood. I just performed at Sonam Kapoor's baby shower what is life?"

Sonam recently turned a year older on June 9 this year. On the occasion of her birthday, she treated her fans with a maternity photo shoot. She was seen wearing a stunning off-white satin outfit by celebrated designers Abu Jani and Sandeep Khosla. Sonam Kapoor Flaunts Her Baby Bump in New Pictures With Anand Ahuja (View Pics)

Sonam is currently enjoying her third trimester and is often spotted hanging out with sister Rhea in London. Sonam and Anand announced that they are expecting their first child in March earlier this year. The couple shared mesmerizing pictures on their social media accounts and wrote "Four hands. To raise you the very best we can. Two hearts. That will beat in unison with yours, every step of the way. One family. Who will shower you with love and support. We can't wait to welcome you. #everydayphenomenal #comingthisfall2022."