As actor Sunny Deol's son Karan Deol turned a year older on Saturday, he wished him loads of luck and love. 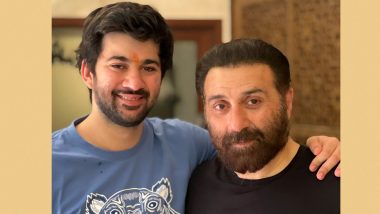 Karan and his father even cut a cake with media personnel today. For the unversed, Karan made his acting debut with his father Sunny's directorial Pal Pal Dil Ke Paas in 2019. He is now waiting for the release of his second film Velle.