Anupam Kher recently put out a poll on his social media for fans to decide the title of his 525th movie. He then shared images of the fans having voted for the name The Last Signature and him holding a clapboard with the name The Signature written on it, saying that this would be the title of the film. 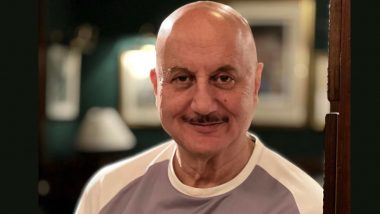 Veteran actor Anupam Kher, on Wednesday, finally announced the title for his upcoming flix, which will be his career's 525th film, sharing a set of pictures, on his social media account. Taking to his Instagram handle, the Special 26 actor dropped a string of pictures, from which one photo shows Anupam holding a clapper board with The Signature written on it. The Kashmir Files Star Anupam Kher Meets UP Chief Minister Yogi Adityanath at His Residence.

In the second photo, Anupam could be seen posing with the director of the movie, Gajendra Ahire Ghoda. The third one shows the clapper board only. And the last snap shows a voting list, where his fans gave The Last Signature the maximum votes when asked by Anupam to suggest a name for his new project.

Sharing these pictures, Anupam wrote, "It is "THE SIGNATURE" ! Yes!! The name of my 525th movie is finalised. Slightly modified but mainly based on your suggestions. We got more than 100,000 responses on various SM platforms! The movie is directed by brilliant @gajendraahire_goda cinematography by @krishnasoren and produced by legendary #KCBokadia ji. Thank you for helping us decide the title of our film Jai Ho! #TheSignature #Film #Title #People" Anupam Kher Kickstarts His 67th Birthday by Showing of His Fit Body and It’s Definitely Setting Goals.

Anupam Kher, a National School of Drama (NSD) alumnus, has starred in a number of Hindi films such as Ram Lakhan, Lamhe, Khel, Darr, Dilwale Dulhaniya Le Jayenge, A Wednesday, and M S Dhoni: The Untold Story during the course of his nearly four-decade career. Anupam also concluded the shooting of Uunchai with legendary actors Amitabh Bachchan, Boman Irani, and Neena Gupta.