Hawkeye: Know More About Echo, Alaqua Cox’s Mystery Character Shown at End of Episode 2 and Her Connection to Kingpin

Alaqua Cox is playing the role of Echo/Maya Lopez. Echo in the comics is a character of Native American origin and is one of the few deaf Marvel Superheroes. Echo is the adopted daughter of Kingpin and heavily appears in Daredevil comics. 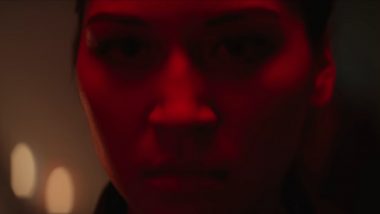 Hawkeye had its first two episodes premiere and it showcased us a smaller, more street level side of the MCU and gave us some interesting new foes. The Tracksuit Mafia looks like will be the primary group that Clint and Kate will be fighting in the series, just like in the Matt Fraction comics, but that’s not all. An interesting antagonist was set up at the end of episode two for Hawkeye and it honestly has us excited to see where the character might go from here. Hawkeye Review: Hailee Steinfeld Adds Occasional Doses of Fun to Otherwise Okayish Opening Episodes of Jeremy Renner’s Marvel Series (LatestLY Exclusive).

At the end of episode two we are shown Alaqua Cox’s mystery character who looks like will be the primary antagonist of the series, but who exactly is she? Well Alaqua Cox is playing the role of Echo/Maya Lopez. Echo in the comics is a character of Native American origin and is one of the few deaf Marvel Superheroes. The second deaf female character in Marvel after Lauren Ridloff’s Makkari in Eternals, Echo is a great addition to increase the diversity of the characters.

Created by David Mack and Joe Quesada, Echo is a character who primarily appears as a supporting character in Daredevil comics. While she doesn’t have any superpowers, her abilities are very close to that of Taskmaster’s. Echo can watch the fighting style of anyone and perfectly mimic it. She has great photographic reflexes and on occasions has also perfectly captured the movements of Daredevil.

For her origin, Echo is heavily tied to the Kingpin aka Wilson Fisk. After killing her father, Kingpin adopts Maya to fulfill her father’s dying wish of giving her a good life. Kingpin takes Maya into his ranks and puts her up to criminal activities. Kingpin ends up sending Maya to take out Daredevil, but she and Matt Murdock end up falling in love which prompts her to turn against Fisk. Hawkeye: From Rogers the Musical to the Tracksuit Mafia, 7 Best Moments From the First 2 Episodes of Jeremy Renner’s Disney+ Marvel Show!

We surely will be getting more of Echo as episodes go on considering how big of a character she is when it comes to the grounded side of the Marvel universe. Vincent D’Onofrio himself is rumoured to return as Kingpin in Hawkeye somewhere around episode four. At this point that seems inevitable considering just how important he is to Echo’s mythos. Not only that, but on Disney+ Day it was also announced that Echo will be getting her own Disney+ show. We can definitely hope to see her origin be explored more over there too.

Hawkeye is streaming every Wednesday on Disney+ Hotstar at 1:31pm.

(The above story first appeared on LatestLY on Nov 24, 2021 06:01 PM IST. For more news and updates on politics, world, sports, entertainment and lifestyle, log on to our website latestly.com).