An accompanying editorial stresses that clinicians should "take advantage of the breast cancer diagnosis as an opportunity for interventions that can be far-reaching." The authors note that several lifestyle interventions can not only address obesity but also potentially prolong survival in patients with cancer. 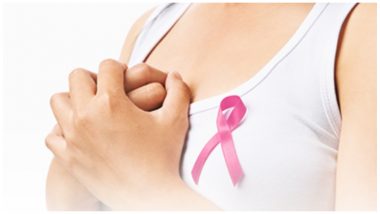 Washington, December 7: In an analysis of women with early breast cancer, black women had higher rates of obesity and other health conditions that can affect survival, compared with white women. The findings are published early online in CANCER, a peer-reviewed journal of the American Cancer Society (ACS). Also Read | COVID-19 Vaccine Update: Serum Institute of India Seeks Emergency Use Authorisation for Oxford COVID-19 Vaccine Covishield in India.

Obesity is a known risk factor for various cancers, and its rise over the past few decades has contributed to a rise in breast cancer rates that is greater in Black women than white women. Also Read | Mysterious Disease in Andhra Pradesh: 1 Dead, 290 Infected in Eluru.

At the same time, as breast cancer mortality rates have declined, the decline has been less pronounced in black women, producing a 40 per cent mortality gap.

To investigate further, Kirsten Nyrop, PhD, of the University of North Carolina at Chapel Hill, and her colleagues analysed information concerning 548 patients treated at their hospital for early breast cancer.

The team found that 62 per cent of black patients and 33 per cent of white patients fell within the obese weight range, and higher percentages of black women had obesity-related comorbidities, such as hypertension, diabetes, and high cholesterol than white women.

Yet, despite significant differences in the prevalence of obesity and comorbidities, there were no differences between black and white patients in treatment decisions with regard to type of surgery, chemotherapy, radiation, or endocrine therapy.

"Early breast cancer is highly treatable, and survival rates have improved steadily due to treatment advances and early detection through mammograms; however, the high rates of obesity, overall comorbidities, and obesity-related comorbidities observed among women with early breast cancer--especially among black women--can contribute to disparities in overall survival of these patients," said Dr Nyrop.

"Findings from this study need to be considered within the larger context of the cancer-obesity link and the disparate impact of the obesity epidemic on communities of colour in the United States," added Dr Nyrop.

Dr Nyrop noted that rates of many cancers that are impacted by obesity are higher in Black women as are rates of numerous obesity-related conditions such as diabetes and hypertension.

"As the COVID-19 pandemic has glaringly underscored, there is an urgent need to address the systemic and socioeconomic aspects of obesity that disproportionately affect minority communities in the US if we are to reverse health disparities," added Dr Nyrop.

An accompanying editorial stresses that clinicians should "take advantage of the breast cancer diagnosis as an opportunity for interventions that can be far-reaching." The authors note that several lifestyle interventions can not only address obesity but also potentially prolong survival in patients with cancer.