To mark the 22 years of victory of the Kargil War, Northern Command of the Indian Army organised a two-day motorcycle rally to commemorate Kargil Vijay Diwas in Jammu and Kashmir. 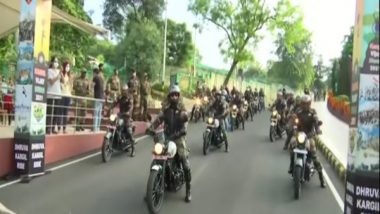 Visuals from the motorcycle rally (Photo/ANI)

Udhampur (Jammu and Kashmir) [India], July 22 (ANI): To mark the 22 years of victory of the Kargil War, Northern Command of the Indian Army organised a two-day motorcycle rally to commemorate Kargil Vijay Diwas in Jammu and Kashmir.

To commemorate the Kargil Vijay Diwas, Lt Gen Y K Joshi, GOC in C Northern Command is leading the 25 bikers from Udhampur under 'Dhruv Kargil Ride' which will end at Kargil War Memorial in Drass.

While speaking to media on the occasion, Lt Gen Y K Joshi said that this motorcycle rally is organised to remember the fallen heroes during operation Vijay.

"Today this effort of our to organise this motorcycle rally are undertaking to remember the fallen heroes during operation Vijay and also to revive, rekindle and invigorate the spirit of patriotism among the youths. On July 7, I have flown to 'Batra top' in Sukhoi 30MKI, that was a day when one of my commander Captain Vikram Batra has laid down his life. Today I am undertaking this motorcycle rally to remember all the fallen heroes who laid done their lives for the nation," said Lt Gen Y K Joshi.

He further gave his message to youths of the nation and said that it is important for the youth to dream big, to think big, to do big and to become big. "Do not follow the beaten track, go into the unknown make your own path and let others follow," he added.

He also assured the citizens of the nation and said that be at rest the brave soldiers of Indian Ary will always stand to protest the nation.

Lt Col Abhinav Navneet told ANI that this motorcycle rally is organised in collaboration with Jawa Motorcycle Company and the Indian Army.

"This year we are have completed 22 years of the victory of Kargil War. This motorcycle rally is organised in collaboration with Jawa Motorcycle Company and the Indian Army. We have named this rally "Dhruv Kargil Ride", in which 25 bikers will start their journey from Udhampur and will conclude at Kargil War Memorial in Drass. There we will offer our tribute to the brave soldiers of Kargil war and will boost the morale of soldiers who are posted there," said Lt Col Abhinav Navneet.

Major Kajal, who was associated for the first time with this rally said that it is a privilege for her to be part of the rally and to remember martyrs of the Kargil war.

"It's a matter of honour. I have been associated with this rally for the first time in my entire service. It's a privilege to contribute to remember martyrs who participated in the Kargil war. It has been planned for 2 days - July 22 and 23 starting from Udhampur to Drass," said Major Kajal.

She further said that it is a matter of pride for us to do something for the soldiers who have actually laid down there life at the line of duty. "It's just a very small contribution from our side to remember them, the sacrifice what they made for the nation by laying their life and it was the big victory for the nation," she added.

Major Vivek said that we will start with 25 bikers in Udhampur and later others will join us on the way and we will be 75 at the Kargil War Memorial in Drass.

"I feel proud to be a part of this motorcycle rally which is organised as to tribute to remember the brave soldiers of the Kargil War, who fought for the nation without fear. We will start with 25 bikers in Udhampur and later others will join us on the way and we will be 75 at the Kargil War Memorial in Drass," said Major Vivek.

The Indian armed forces had defeated Pakistan on July 26, 1999. Since then, the day is celebrated as 'Kargil Vijay Diwas' to rekindle the pride and valour of the soldiers who took part in Operation Vijay.

The day marks the victory of Indian soldiers in recapturing the mountain heights that were occupied by the Pakistani Army on July 26, 1999, known as the Kargil War. (ANI)