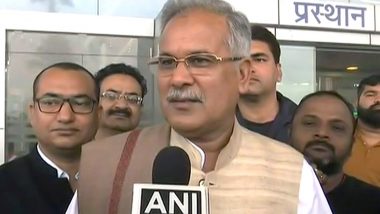 Raipur, February 20: Chhattisgarh Chief Minister Bhupesh Baghel on Saturday wrote a letter to Union Defence Minister Rajnath Singh requesting the setting up of a long-pending army camp at Bilaspur at the earliest.

"The commercial passenger services are starting from Bilaspur on March 1. The state government is keen on setting up an army camp at Chakrabhata, Bilaspur. The establishment of the army cantonment in the state will not only speed up the proper development of this area but also the opportunities for army service will be readily available to the youth of the state," Baghel wrote in the letter. Chhattisgarh CM Bhupesh Baghel’s Radio Programme ‘Lokvaani’ Gaining Popularity Across Cities, Villages, Forest and Hilly Regions.

Highlighting that the state government has developed the airstrip and completed the necessary procedure, he said: "Bilasabai Caveen Airport, Bilaspur is now recognised by the DGCA. Now, this airstrip is available to cater to the aviation-related requirements of Civil Aviation and the Army."

He added that the presence of an army cantonment in the state is also expected to be helpful in the eradication of Naxal extremism.