Get latest articles and stories on India at LatestLY. The Centre has sanctioned Rs 180 crore for the restoration of the railway network devastated by floods and landslides in Assam's Dima Hasao district. 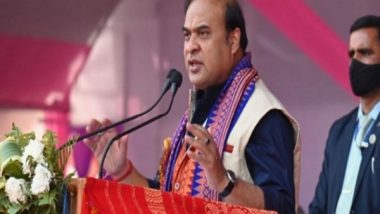 Guwahati (Assam) [India], May 23 (ANI): The Centre has sanctioned Rs 180 crore for the restoration of the railway network devastated by floods and landslides in Assam's Dima Hasao district.

Assam Chief Minister Himanta Biswa Sarma on Monday confirmed the allocation of Rupees 180 crore by the Centre for the restoration work.

"The Railway Ministry has also assured to complete the restoration work of railway network in Dima Hasao district by July 10 this year," Sarma said.

"Repairing the damaged portions of the vital rail link will restore connectivity between Barak and Brahmaputra valleys of Assam and reconnect Tripura, Mizoram and parts of Manipur with the rest of the rest the country," added Sarma.

Following the damage to railway tracks at multiple locations, the Northeast Frontier Railway (NFR) had suspended all trains through Lumding-Badarpur Hill Section to Barak Valley, Tripura, Mizoram, and Manipur, after the floods hit the state in mid-May.

24 people have lost their lives in devastating floods and landslides in Assam this year so far. (ANI)