The impact of climate crisis can be seen around the world and not acting now will destroy lives, livelihoods and natural habitats, warned environmental experts on Monday and reiterated that climate change is happening now and "no one is safe". 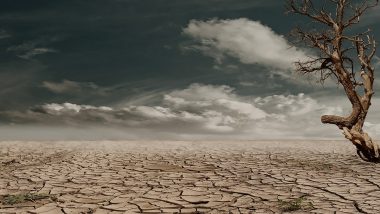 New Delhi, Aug 9: The impact of climate crisis can be seen around the world and not acting now will destroy lives, livelihoods and natural habitats, warned environmental experts on Monday and reiterated that climate change is happening now and "no one is safe".

The Centre for Science and Environment (CSE) said India's contribution to emissions has been minuscule, but that does not mean the country need not act.

The reactions came after the launch of the Intergovernmental Panel on Climate Change's (IPCC) latest report -- Climate Change 2021: The Physical Science Basis -- that warned of increased extreme weather events across the globe in the coming years. What is Climate Change? What Has IPCC Said in its Warning Report?

"Climate change is here and now. No one is safe. Despite warnings for so many years, the world did not listen. We need to act now. Reducing greenhouse gas emissions will not only limit climate change but also reduce air pollution."

She also said that recently, only 110 countries of the 191 parties to the United Nations Framework Convention on Climate Change have submitted new or updated Nationally Determined Contributions (NDCs) ahead of the next climate conference (COP 26).

"Governments need to make the net-zero plan an integral part of their Paris Agreement. They must finance and support the developing countries to adapt to climate change as promised under the agreement. Every business, citizen and investor must play their part.

"We cannot undo the mistakes of the past but this generation of political and business leaders and conscious citizens can make things right," Anderson said.

Reacting to the report, the president-designate of the upcoming COP26 Alok Sharma said the "lights are flashing red on the climate dashboard".

"We must come together at COP 26 and agree on ambitious emission reduction targets that lead us to net-zero by 2050."

"The impacts of the climate crisis can be seen around the world and if we don't act now we will continue to see the worst effects impact lives, livelihoods and natural habitats," he said.

The next decade is decisive, Sharma said and urged the world to follow science and embrace their responsibility to "keep the goal of 1.5 degree Celsius alive".

"We can do this by coming forward with ambitious 2030 emission reduction targets, long-term strategies with a pathway to net-zero by the middle of the century and taking action now to end coal power, accelerate the roll-out of electric vehicles, tackle deforestation and reduce methane emissions."

Listing the key takeaways from the report, CSE Director General Sunita Narain said the world might be hurtling towards a 1.5 degrees Celsius temperature rise by 2040 with human activities undoubtedly being the main trigger for climate change while the efficiency of sinks to absorb emissions is going down.

The world needs to reduce greenhouse gas emissions by 45-50 per cent below the 2010 level by 2030 and reach net-zero by 2050. It needs transformational action... it needs hard and drastic action, she said.

"The Indian government is sanguine about doing more than other countries in terms of comparable action to reduce CO2 emissions. But we have no measurable targets to reduce emissions. This is why we are doing well -- our NDC is to reduce not absolute emissions but the emission intensity of our economy." Narain said.

Senior Climate Campaigner at Greenpeace India Avinash Chanchal said unless there are immediate rapid and large scale reductions in greenhouse gas emissions, limiting warming 1.5 degrees Celsius will be beyond reach.

Ulka Kelkar, Director of Climate Programme at World Resources Institute India said the report comes amid consternation over extreme weather, despite 30 years of warnings from the IPCC.

"We need to plan for climate risks while building cities. We need technology that revolutionises the way we manufacture -- with green hydrogen and recycling. We need to use our land and natural resources responsibly to support livelihoods."

Roxy Mathew Koll, Senior Scientist at the Indian Institute of Tropical Meteorology said The most important point from the IPCC AR6 report is that mitigation and adaptation strategies submitted by nations through the Paris Agreement are insufficient to keep global surface temperature increase within 1.5 degrees Celsius or even 2 degrees Celsius.

"With the global mean temperature rise now going above 1 degree Celsius, India is at a crucial juncture where we are already facing increasingly extreme weather events such as cyclones, floods, droughts and heatwaves."

Koll added that India needs to urgently map the risks based on these projected changes "but we do not even have a country-wide risk assessment based on observed changes."

Ajay Mathur the Director-General of International Solar Alliance said the global energy sector accounts for around 73 per cent of total emissions while reiterating that solar energy offers an ideal solution to all countries.

"Solar energy offers an ideal solution to all countries. The technology is ready and it is cost-effective. We need global collaboration to scale it up exponentially and expeditiously," he said.