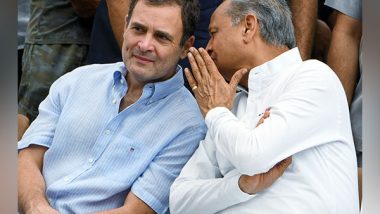 The closed-door meeting between the two leaders lasted for almost two hours. Gehlot also marched with Rahul Gandhi in his 'Bharat Jodo Yatra. Gehlot arrived in Kochi in the afternoon and was present at the Adlux Convention Centre where Rahul Gandhi held a press conference. Who Will Become Next Congress President? From Ashok Gehlot to Shashi Tharoor and Sachin Pilot, Here’s a List of Potential Candidates.

Significantly, at the press conference, Rahul Gandhi asserted that the one-person, one-post resolution of the party should be maintained with regard to the Congress president's post as well.

The comment also has an important implication for Gehlot in case he contests the party presidential poll. A victory would mean that he would have to give up the chief ministership. In that case, there is also a possibility that Sachin Pilot could be elevated in Rajasthan.

Giving an indication of his willingness to contest the presidential election, Ashok Gehlot, who is considered to be a staunch Nehru-Gandhi family loyalist, had said on Wednesday that he is willing to accept any responsibility given to him by the party. Gehlot had met party's interim chief Sonia Gandhi on Wednesday.

Congress leader Shashi Tharoor has already made known his intention to enter the fray while some other names are also doing the rounds. Earlier, Rahul Gandhi emphasised on the "one person, one post" norm and said he believes the commitment of party's Udaipur declaration would be maintained in the election for the party's topmost post.

Describing the post of Congress president as an "ideological post", Rahul Gandhi said the position "represents a set of ideas and belief system and vision of India."

Answering a question during a press conference on the 15th day of the Bharat Jodo Yatra here, Gandhi said: "You are taking on a position. It is a historic position that defines and has defined a particular view of India. It is not just an organisational post. The Congress president is an ideological post, it is a belief system. My advice would be whoever becomes the president should remember that he represents a set of ideas and a belief system and a vision of India."

"What we had decided in Udaipur. 'One person, one post' is a commitment of Congress and I expect that commitment will be maintained (on party's presidential post)," he added.

The Congress had decided on a set of organisational reforms during the Udaipur Chintan Shivir held earlier this year. The declaration said that the principle of "one person, one post" should be followed.

Rahul Gandhi is not likely to run for the presidential poll scheduled to be held on October 17. The results will be announced on October 19. Taking a veiled jibe at the Bharatiya Janata Party, Gandhi today said that Congress is fighting a "machine" that has "captured the institutional framework" of the country.

"We are fighting a machine that has captured the institutional framework of this country and has unlimited money, unlimited ability to pressurise, buy and threaten people. The yatra is designed to tell the people of India that they need to be united and need to go back to an India that was loving and affectionate," he said.

The nomination process for the post of Congress president will begin on September 24 and conclude on September 30.