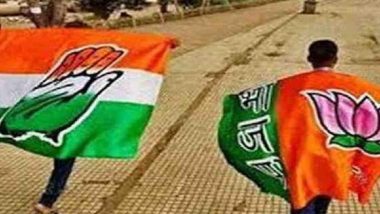 Jaipur, December 14: Congress has won 620 seats in the polls for the 50 municipal bodies in the state. The State Election Commission on Sunday released the results of the general election held for member posts in 50 municipal bodies (43 municipalities and 7 city councils) in 12 districts of the state. Also Read | Karnakata Apple iPhone Plant Violence: Wistron Reports Losses Worth Rs 440 Crore, Says Thousands of iPhones Were Stolen During Rampage.

Ayukta PS Mehra informed that on December 11, voting was held for 50 municipal bodies of the state, in which 79.90 per cent voters exercised the franchise. Out of 1,775 wards of all the bodies, 620 candidates of Congress, 548 of BJP, seven of BSP, two each of CPI and CPI (M), one of RLP and 595 Independent candidates won. Also Read | Delhi Smog Shrouds Parts of National Capital Leading to Decreased Visibility, View Pics: Live Breaking News Headlines & Updates, December 14, 2020.

"My heartiest congratulations and best wishes to all the candidates who have won the municipal and city council elections. I express my gratitude to the people of the state who expressed their confidence in the Congress party and gave the Congress victory," Rajasthan Chief Minister Ashok Gehlot said in a tweet (roughly translated from Hindi).

"I thank all the Congress workers for their hard work and congratulate them on the victory," Gehlot added.