Get latest articles and stories on India at LatestLY. Soon after the news of Alt News co-founder Mohd Zubair's bail plea being rejected made rounds on Saturday, his lawyer Soutik Banerjee alleged that Delhi Police DCP KPS Malhotra "leaked the order to the media" even before the "magistrate pronounced the order". 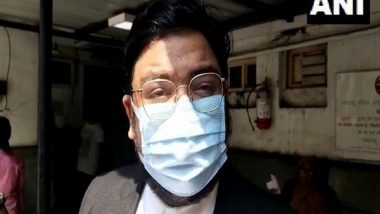 New Delhi [India], July 2 (ANI): Soon after the news of Alt News co-founder Mohd Zubair's bail plea being rejected made rounds on Saturday, his lawyer Soutik Banerjee alleged that Delhi Police DCP KPS Malhotra "leaked the order to the media" even before the "magistrate pronounced the order".

He called for an introspection behind the leakage of the magistrate's order before it was officially pronounced.

Earlier, Malhotra claimed that Zubair's bail plea was rejected by the Patiala House Court and was granted 14-day judicial custody.

The Alt News co-founder was produced before the court after his 4-day police remand ended today.

"Arguments took place until lunch and the judge reserved the matter for judgment. The judge hasn't come after lunch yet. Shocked to see that DCP KPS Malhotra has leaked in the media that our bail plea has been rejected and 14-day judicial custody granted," Banerjee said.

Calling the entire unfolding of events "scandalous", the lawyer said that it "speaks the status of rule of law in our country".

"Extremely scandalous and speaks of the status of rule of law in our country today that even before the judicial magistrate has sat and pronounced the order, police has leaked the order to media. How KPS Malhotra knows what the order is beyond me. This calls for introspection," he said.

Presenting the argument in the court, Advocate Vrinda Grover, representing Mohd Zubair, said, "The mentioned tweet belonged to film 'Kissi Se Na Kehna' by Hrishikesh Mukherjee, it's a lovely comedy and was allowed by censor board...They say the tweet is provocative and sensitive, but still no direction from Twitter to remove it."

The lawyer argued that formatting the phone is not illegal.

Meanwhile, Atul Shrivastava, representing Delhi Police sought the dismissal of the bail plea stating that there are donations from countries like Pakistan and Syria and therefore the case is "not just of a simple tweet".

"It is not a case of time-barred... It is still a continuing offence as the tweet is still there... When the film was released, it was not the age of the internet. Donations are from Pakistan, Syria, so considering gravity, it's not just a case of a simple tweet...accused is Pravda Media director, he smartly deleted everything...In such circumstances, bail application should be dismissed...deletion of data from phone after FIR is important."

Delhi Police has sought judicial custody of Alt News co-founder Mohammed Zubair after his 4-day remand ended on Saturday in a case related to an alleged objectionable tweet.

The FIR against Zubair was lodged on June 20 based on the complaint filed by the Duty Officer of the IFSO unit of the Delhi Police Special Cell which tackles cyber crimes. (ANI)