Senior Advocate John also questioned that the complainant for not filing any a single application to direct her client to reactivate her Twitter account. 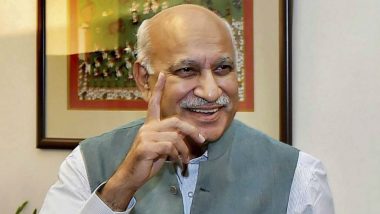 New Delhi, February 9: A Delhi Court is set to pronounce the Judgement tomorrow in a criminal defamation case filed against journalist Priya Ramani by former Union Minister MJ Akbar. Additional Chief Metropolitan Magistrate Ravindra Kumar Pandey will pronounce the Judgement on Wednesday. The court recently had kept the judgement reserved after both of the parties concluded the final arguments in the matter.

Senior Advocate Luthra said that if Ramani makes a defamatory statement after so many years, then it is her onus to prove the truth. MJ Akbar, while advancing her final argument had questioned Journalist Priya Ramani and said she has destroyed evidence in the defamation case against her by deleting her Twitter account, which is a criminal offence.

MJ Akbar, the former Minister of State for External Affairs, had filed a defamation case against the journalist Priya Ramani for accusing him of sexual misconduct.

Ramani was the first woman to accuse Akbar of sexual harassment during the #MeToo campaign. The allegations levelled against him forced him to resign from the Union Cabinet on 17 October 2018.