Who Is Vinai Kumar Saxena? Know All About the New Lieutenant-Governor of Delhi

Vinai Kumar Saxena has been appointed as Delhi's new Lieutenant-Governor on Monday and has the distinction of heading the Khadi and Village Industries Commission (KVIC), which was adjudged as the country's best-performing government institution under him. 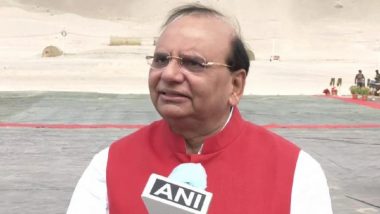 New Delhi, May 23: Vinai Kumar Saxena has been appointed as Delhi's new Lieutenant-Governor on Monday and has the distinction of heading the Khadi and Village Industries Commission (KVIC), which was adjudged as the country's best-performing government institution under him. Saxena's appointment comes days after Anil Baijal resigned from the post citing "personal reasons".

Saxena is the first corporate man ever selected for such a gubernatorial post and is a well-known name in the Indian Corporate and Social sector with over three decades of vast experience. Vinai Kumar Saxena To Be New Lieutenant Governor of Delhi.

Born in an educated and reputed Kayastha family of Uttar Pradesh, Saxena graduated from Kanpur University in 1981 and holds a Pilot Licence. His leadership abilities on a diverse range of social and corporate matters combined with technical, legal, social and cultural skills make him a philanthropist in vision and corporate scientist in action.

The new Delhi LG started his career in 1984 as an Assistant Officer in Rajasthan with JK Group. After working for 11 years in different capacities with its White Cement plant, he was elevated in 1995 as General Manager to look after the proposed Port Project in Gujarat.

He then rapidly rose to become the CEO and was later elevated as Director of the Dholera Port Project. He founded a widely acclaimed NGO, namely National Council for Civil Liberties (NCCL) in 1991 with its headquarters at Ahmedabad.

In October 2015, Saxena was appointed as the Chairman of KVIC where he explored the untapped streams of Khadi and Village industry sectors and first time implemented many innovative employment-generation schemes like 'Honey Mission', 'Kumhaar Sashaktikaran Yojana' and 'Leather Artisans' Empowerment Scheme' that won accolades from all quarters.

Under his leadership, the turnover of KVIC grew by a massive 248 per cent while a massive 40 lakh new employment was created in just seven years. It was during the tenure of Saxena, that KVIC, for the first time, clocked a historic turnover of Rs 1.15 lakh crore in 2021-22, the highest by KVIC and any FMCG company in India so far. Thus, he played a pivotal role in establishing Khadi as a global brand.

In recognition of his sharp social, cultural, political and administrative acumen, the government of India also nominated KVIC Chairperson to several prestigious committees and panels.

On March 5, 2021, Saxena was appointed as one a member of the National Committee to Commemorate the 75th anniversary of India's Independence.

On September 9, 2020, he was then nominated as a member of the "Governing Council" of the prestigious "Council for Scientific and Industrial Research (CSIR).

The President of India, on March 18, 2019, in his capacity as Visitor of the University, nominated Saxena as a "Member of University Court" of Jawaharlal Nehru University (JNU). During his six-decade journey so far, Saxena has also won several awards for his accomplishments.

In May 2008, he won International Felicitation by United Nations Decade of Sustainable Development (UNDESD) in association with UNESCO, UNICEF and UNDP for "Outstanding Contribution to Environment Protection and Water Security" in Gujarat.

"The President of India has been pleased to appoint Vinai Kumar Saxena to be the Lt Governor of National Capital Territory of Delhi with effect from the date he assumes charge of his office," reads the statement.