Paresh Kumari Devi (75), the grandson's wife of 'Raja' Rajendra Narayan Bhanjadeo of Kanika, was allegedly killed in Srivihar Colony in Bidanasi police station area where the former royals live at present, they said. 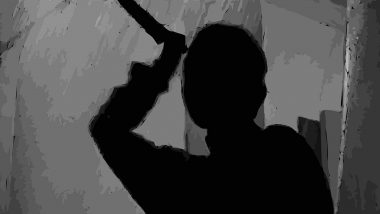 Cuttack, January 26: The descendant of an erstwhile royal family of Odisha was allegedly hacked to death by her son over a property dispute in Cuttack, police said on Wednesday. Paresh Kumari Devi (75), the grandson's wife of 'Raja' Rajendra Narayan Bhanjadeo of Kanika, was allegedly killed in Srivihar Colony in Bidanasi police station area where the former royals live at present, they said.

"On Saturday, there was a fight between my mother and brother. So, I had brought my mother to the upper floor of the house to live with me," said her daughter Jayanti Samantray. "I don't know when on Tuesday night my brother entered the room where my mother was sleeping. After hearing her screams, I switched on the CCTV screen and saw my brother hacking my mother," she alleged. Odisha Shocker: Man Kills Wife, 9-Year-Old Son In Bhubaneswar, Detained.

Samantray said her brother Gopal Narayan Bhanjadeo often blamed the mother for "ruining his life". "My mother had earlier approached the police, but they refused to register a complaint stating that it had become a regular affair in the family," she claimed. Bhanjadeo's third wife Babita, who lives away from her husband, said the mother and her son had a dispute over properties. "Both the son and the mother were suffering from hypertension and no one could stop them when they used to start abusing each other." Uttar Pradesh Shocker: Woman Kills Pregnant Minor Girl With Son’s Help For Family ‘Honour’ in Kanpur; Arrested

While Bhanjadeo's first wife had died, his second wife lives in Delgi after divorce, said a neighbour. Cuttack's Deputy Commissioner of Police Prateek Singh said, "We have registered a case and the accused is being interrogated. The body has been sent to SCB Medical College and Hospital for post-mortem." A forensic team visited the crime scene and collected evidence, police said.