Get latest articles and stories on India at LatestLY. Chief Justice of India NV Ramana on Saturday said that for the functioning of a healthy democracy it is imperative that the people feel that their rights and dignity are protected and recognized and "expeditious adjudication of disputes is the hallmark of a healthy democracy". 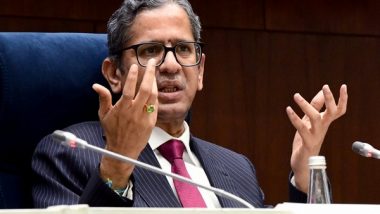 Srinagar (Jammu and Kashmir) [India], May 14 (ANI): Chief Justice of India NV Ramana on Saturday said that for the functioning of a healthy democracy it is imperative that the people feel that their rights and dignity are protected and recognized and "expeditious adjudication of disputes is the hallmark of a healthy democracy".

"Denial of justice would ultimately lead to anarchy. Soon the institution of the judiciary would be destabilized as people will look for extrajudicial mechanisms. Peace shall only prevail when people's dignity and rights are recognized and protected," said the CJI at the foundation stone laying ceremony of the new High Court building complex at Srinagar.

The CJI said that courts have the constitutional duty of adjudication of rights and upholding the aspirations of our Constitution in our country.

"One of the major challenges to the protection of rule of law and human rights is the inability of the formal justice system to deliver speedy and affordable justice to all," he said.

"The justice delivery mechanism in India is very complex and expensive," the CJI added.

He further said the judiciary must be at its innovative best to ensure that the challenges to its working are met with just and Constitutional measures.

"Technology has been a strong aid to the judiciary. Now, virtual courts are bridging the gaps of accessibility by reducing time, cost and distance. But in a country like India, where a vast digital divide still exists, much needs to be done in order to harness the full potential of technological innovations," he said.

The CJI started his speech by quoting poet Ali Jawad Zaidi, 'Muddaton baad jo aayaa hoon is vaadi mein Ik naya husn, naya rang nazar aata hai' (I have come to this valley after ages. I can see a new beauty, new colour). He said these words reflected his sentiments.

CJI Ramana said J-K has produced many eminent jurists and judges, among them were two former Chief Justices of India, Justice AS Anand and Justice TS Thakur, and nine Judges who "adorned the bench of the Supreme Court and the 10th one, Justice Kaul is on the dais with us".

Expressing delight over the foundation stone laying of the new High Court Complex in Srinagar, the CJI said that "solving the problems of infrastructure is very close to my heart".

"I have consistently emphasized the need for development and modernization of infrastructure. Sadly, post-independence, judicial infrastructure has not been overhauled to meet the demands of the growing needs of modern India," he said.

"We are far behind in making our courts inclusive and accessible. If we don't attend to this urgently, the Constitutional ideal of access to justice would stand defeated," CJI added.

"The condition of judicial infrastructure across the country is far from satisfactory, courts are operating from rented accommodations and under deplorable conditions," the CJI further said.

The CJI called upon the judges and lawyers to take an oath to work hard to make justice a reality.

"Mere laws are not enough to build tradition in a country. It requires men of indelible character inspired by high ideals to infuse life and spirit in the skeleton of the laws," he said.

He said judges and judicial officers play a very significant role in our Constitutional scheme and the common man has always considered the judiciary as the ultimate guardian of rights and liberties.

"Your swift, proactive and sensitive decision can make a lot of difference in the lives of several people who are in desperate need of justice. Create a congenial environment for the litigants. Often, litigants are under a lot of psychological stress. Litigants may be illiterate, unaware of the law and have various financial issues. You should try to make them feel at ease," he added.

The CJI further said that district Judiciary work at the grassroot level, and are the first contact for the justice seeker with the judicial system.

"You have a direct link with the people. You must persuade parties to choose ADR mechanisms whenever possible. This will not only help the parties but also will help in the reduction of pendency," he added.

He expressed hope that the new court premises spread around 1.7 lakh square meters, with an estimated cost of Rs. 310 crores having all modern facilities and amenities, will become the new norm for the construction of future court buildings.

The CJI also lauded the kindness of the people of J-K and said that the enriching culture of the Valley transforms every soul that visits this scenic land.

"I had the fortune to visit this paradise many times, but every time I have been amazed by its beauty and moved by its hospitality. It's a land where one gets to experience four seasons. The soils of Kashmir are home to the world's best saffron, red chillies, apples and walnut. Kashmiri artisans are known all over the world for their crafts and textiles," said the CJI.

He added, "The balance maintained between traditional craftmanship, and contemporary designs, has created a worldwide market for these products. This global acknowledgment of the ancient art form is a nod to the multiple influences, the craftsmen had throughout history. The heart of Kashmir is the heart of its people!"

"As poet Raja Basu, an admirer of Kashmir observed, Jammu and Kashmir is the confluence of three great religions -Hinduism, Buddhism and Islam. It is this confluence which is at the heart of our plurality which needs to be sustained and cherished," he said.

Unfortunately, wealth creation is not commensurate with the true potential of this beautiful region with invaluable and highly skilled human resources, he said, adding that this situation needs to change, for the region's bright future. (ANI)