Get latest articles and stories on India at LatestLY. An FIR has been filed against former Samajwadi Party MP Atiq Ahmad for an alleged illegal construction on his ancestral land without permission. 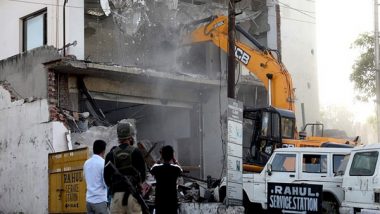 Prayagraj (Uttar Pradesh) [India], May 23 (ANI): An FIR has been filed against former Samajwadi Party MP Atiq Ahmad for an alleged illegal construction on his ancestral land without permission.

The FIR was filed by the Dhumanganj police on the complaint of the Prayagraj Development Authority on Sunday.

In the FIR it has been alleged that Ahmad, who is currently in jail, had undertaken construction once again after the PDA carried out a demolition drive on his ancestral house at Chakia in 2020 as it was said that the construction was undertaken without the approval of the authorities.

The PDA officials had given a written complaint in the police station against the same.

In the complaint, PDA official alleged no permission was taken before the construction of a boundary wall and two tin shades at the former MP's residence in Chakia. (ANI)