Calling reductions in fuel prices a formality, Rajasthan Chief Minister Ashok Gehlot on Saturday claimed the Centre had to reduce the excise duty under the pressure of the Congress party's public awareness campaign decided in the recently held Chintan Shivir. 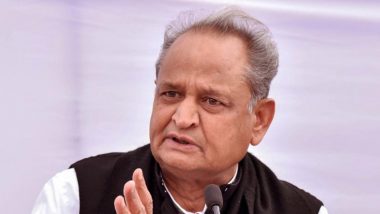 Jaipur, May 21: Calling reductions in fuel prices a formality, Rajasthan Chief Minister Ashok Gehlot on Saturday claimed the Centre had to reduce the excise duty under the pressure of the Congress party's public awareness campaign decided in the recently held Chintan Shivir.

He also demanded that the central government should lower the petrol and diesel prices to the level during the UPA rule if the government wants to give relief to people in the true sense. Fuel Price Cut: Petrol To Get Cheaper by Rs 9.5 per Litre, Diesel by Rs 7 per Litre After Govt Cuts Excise Duty.

However, the opposition BJP demanded from the state government to reduce VAT on petrol and diesel while terming the Modi government's decision a historic one.

“Due to the continuous protests by the Congress against inflation across the country and the pressure of public awareness campaign against the inflation decided in "Navsankalp Shivir, Udaipur", the central government today had to decide to reduce the excise duty on petrol and diesel,” Gehlot tweeted.

"However, in the last two months, the price of petrol and diesel had increased by about Rs 10 per litre. In such a situation, today's deduction appears to be just a formality,” he said.

Gehlot said that if the central government really wants to give relief to the common man, then the excise duty should be reduced to the level of the UPA rule, which will bring the prices of diesel and petrol around Rs 70 per litre.

Welcoming the Centre's move, deputy leader of opposition Rajendra Rathore said that it was a historic decision of the Modi government which will provide relief to the people from inflation. He said that now its turn for the Ashok Gehlot led Congress government in Rajasthan to reduce VAT on petrol and diesel.

“It is the responsibility of the state government to give relief to people by reducing VAT on petrol and diesel,” he said in a video statement. The Centre on Saturday cut excise duty on petrol by a record Rs 8 per litre and that on diesel by Rs 6 per litre to give relief to consumers battering under high fuel prices that has also pushed inflation to a multi-year high. The excise duty cut will translate into a reduction of Rs 9.5 a litre on petrol and Rs 7 a litre in diesel after taking into account its impact on other levies.