Amid allegations of manipulating stories and making editorial decisions during the search at Dainik Bhaskar on Thursday morning, the Income Tax Department has clarified that no such act was carried out by its officials during the raid. 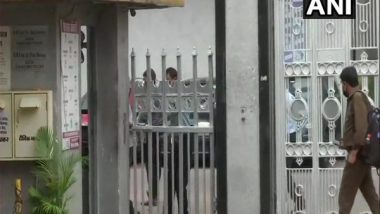 New Delhi [India], July 23 (ANI): Amid allegations of manipulating stories and making editorial decisions during the search at Dainik Bhaskar on Thursday morning, the Income Tax Department has clarified that no such act was carried out by its officials during the raid.

The clarification comes hours after the I-T Department raided the offices of media group Dainik Bhaskar in several locations across the country over alleged tax evasion.

"Certain allegations have appeared in some sections of media that I-T Department officials were suggesting changes in stories and taking editorial decisions during their search on offices of a certain publication. These allegations are absolutely false and are categorically denied by I-T Department," said the I-T Department in a tweet on Thursday.

In an interview with a reputed media channel, Dainik Bhaskar Group Editor Om Gaur said that the Income Tax officials went to the Group's digital department and told the employees that whatever stories they will publish on their digital platform shall go only after their approval.

Denying the allegations of questioning Gaur, the I-T Department said that the claims have no basis and they seem to be "highly motivated".

"Om Gaur is based in Lucknow as per his interview to media. It is emphasised that the Lucknow office of the publication was not searched by the Income Tax team. Gaur was not even questioned. The allegations being made have no basis and in fact, seem to be highly motivated," it added.

In keeping with the Department's protocol, the I-T department said that the investigation team only looked into the financial transactions of the group related to tax evasion.

Earlier on Thursday, government sources said that a search is being carried out in the Dainik Bhaskar group offices under the Income Tax Act over allegations of huge tax evasion.

They said 32 premises, consisting of residential and business premises spread over the cities of Mumbai, Delhi, Bhopal, Indore, Jaipur, Korba, Noida, and Ahmedabad have been covered.

"The search is being done under Section 132 of the Income Tax Act. Searches have been carried out after analysis of the departmental database, banking enquiries and other discrete enquiries," they added.

The sources also stated that the group is involved in various sectors, major being media, power, textiles and real estate, with a group turnover of more than Rs 6,000 crore per annum.

They said that the group has more than 100 companies including holding and subsidiary companies. The flagship company is DB Corp Ltd, which publishes the news daily Dainik Bhaskar. (ANI)