Union Minister for Power and New and Renewable Energy RK Singh on Thursday said that the attempts made by Chinese hackers to target electricity distribution centres near Ladakh were successfully blocked. 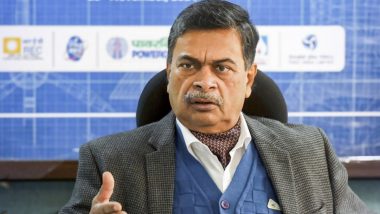 New Delhi, April 7: Union Minister for Power and New and Renewable Energy RK Singh on Thursday said that the attempts made by Chinese hackers to target electricity distribution centres near Ladakh were successfully blocked.

As many as two attempts of cyberattack targeting the electricity distribution in the Union Territory were made by the hackers.

Reacting to media reports claiming a cyber attack on the power grid near Ladakh between August and March, Singh said, "Two attempts by Chinese hackers were made to target electricity distribution centres near Ladakh but were not successful." The Minister further said that the defence system has been strengthened to counter cyber attacks. NIA Raids at Multiple Locations in Kashmir Valley in Connection With Terror Funding Case.

"We have already strengthened our defence system to counter such cyber attacks," he said. As per the media reports, Chinese state-sponsored hackers had targeted the Indian electricity distribution centres near the Union Territory of Ladakh over the last eight months.

Meanwhile, the top brass of the Indian Army and Air Force have been assessing the preparedness and infrastructure requirements along the Line of Actual Control (LAC) as the militaries of both India and China continue to remain in a standoff position in eastern Ladakh. India has made several changes in its deployments post aggression shown by Chinese troops in April-May 2020.

India and China have been talking to each other at both military and diplomatic levels to address the issues but so far they have not been able to do so mainly because of Chinese reluctance. In recent talks to address the Patroling Point 15 friction, they proposed a solution that was not acceptable to the Indian side.

Indian security establishment led by National Security Adviser Ajit Doval has been of the view that the issue would be resolved only if the Chinese did complete disengagement and went back to pre April 2020 positions.

The Indian side has strengthened its deployments manifold all along the LAC.

The Indian Air Force has also started building advanced bases in the forward areas including infrastructure to operate fighter jets and attack helicopters from the forward fields such as Nyoma. (ANI)